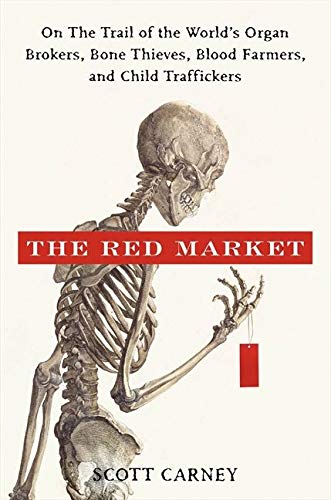 Scott Carney's The Red Market is a brisk, bracing survey of the gristmills and carnage greasing globalization's invisible profit machines. A kind of Lonely Planet guide to some of the world's most profitable flesh trades, this gritty book forgoes the sad glitz of child sex trafficking to explore Asian and Indian Sub-Continent networks catering to U.S. and European demands for kidneys, children, bones, and hair.

Marking out these intimate correlations to Western consumers, The Red Market goes a fair way in puncturing the myth that only sex tourists patronize Asia's human trafficking trade. And in its author's own tentative bewilderment regarding what differentiates a living, breathing human being from a disincarnated bag of meat, is a reminder that the hidden universe of a human body is safeguarded with the greater mystery of a soul.

Flesh trade exposés generally tend toward the prurient, aggressive, or coolly academic. Carney manages a more humane stance by admitting his own naïvete up-front, in a chilling first chapter that recounts the horror and plain business of brokering a deceased college student's return from India to her hometown of New Orleans.

The victim of a late-night accident, "Emily" falls to her death on a cement courtyard at Bodh Gaya, a Buddhist monastery in remote, rural India. Her body lies just ten feet from the room where Carney, Emily's university exchange instructor, sleeps soundly through the night. The next morning, he awakes to the shock of stewarding the diplomatic debacle that Emily's "body now represents."

Perhaps the most striking moment—the moment of Carney's "conversion" to humility before the human body—comes when, at the request of Emily's family, he steps into an Indian autopsy room to photograph their daughter's body in preparation for a stateside postmortem.

There is "a sense of presence, which only accompanies life," Carney muses, stumbling his way toward the conclusion that this presence is best termed a soul. Standing before Emily's young, strong, autopsy-carved body, he comprehends in a visceral way that losing the soul not only "transforms a body into a jumble of matter" but it also relieves a body of any self-defensible right to privacy.

The Western end of the red markets, Carney notes, depends on "a curious language of altruism" coupled with absolute anonymity. These two principles are the cornerstone of blood donation pioneer Richard Titmuss' seminal book, The Gift Relationship—and the two fatal flaws in modern organ, tissue, and body donation.

In what Carney portrays as a mammoth case of good intentions and poor policy, The Red Market describes how groundbreaking U.S. laws banned the sale of human organs and tissue while simultaneously codifying complex—and highly profitable—voluntary, anonymous harvest systems.

Carney doesn't offer groundbreaking alternatives, but he sharpens focus on the supply chains and ethical ironies that undergird our scientifically enhanced paths to longevity and fertility. And while he opens with some uncertainty regarding how and why a body warrants esteem, he closes with a persuasive claim that ending red market exploitation requires a rediscovery and reevaluation of the human body and the impress of holiness strangely lodged within.