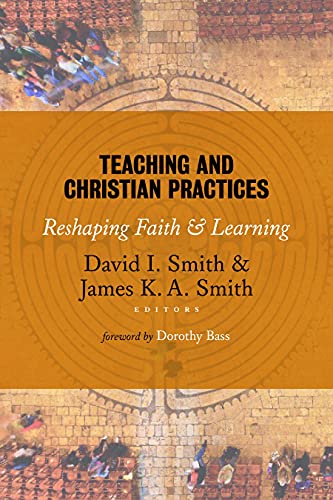 Habits of the Heart & Mind

For the last several years, the four of us have met weekly to eat, pray, and explore texts on Christianity and education. Against the backdrop of these working lunches—sustained with food, punctuated by laughter, and formed by friendship—one book has proven especially thought-provoking. In Desiring the Kingdom (Baker Academic, 2009), James K. A. Smith argues that we humans are social creatures of embodied, meaning-filled habits. That may not sound like a controversial thesis—on the face of it, who would disagree?—but Smith unpacks it and situates it against some notions that have wide currency, especially in the evangelical world.

When we read Desiring the Kingdom last year, we were particularly stimulated by Smith's critique of "worldview" models of Christian education as overly cognitive and individualistic, to the neglect of the communal practices ("liturgies") that shape human affections toward a particular vision of the life worth living ("the Kingdom of God"). We were therefore delighted to have the opportunity to read the newly published collection of essays Teaching and Christian Practices (TCP), edited by James Smith and his Calvin College colleague David I. Smith, with contributors from a variety of American Christian colleges and universities. The authors of TCP undertook to integrate classic Christian practices into their teaching and mentoring of students, and the book reports and reflects on the results. As we made our way through the book, four questions in particular emerged as thematic for our discussions: What is "Christian" about these practices? How do people change? What does TCP teach us about pedagogy? What might have to be sacrificed in order to create space for such practices?

What Is "Christian" About These Practices?

From the front cover to the last page of text, the modifier "Christian" characterizes the practices being recounted and analyzed. There's nothing wrong with that—in fact, it seems only appropriate, given the book's focus on "the practices involved in teaching and learning … in an explicitly Christian frame." However, one might reasonably ask: What, precisely, makes a practice "Christian"? The editors endorse the definition offered by Dorothy Bass and Craig Dykstra: Christian practices are "things Christian people do over time in response to and in the light of God's active presence for the life of the world." The salutary result is to widen the set of "Christian practices" considerably beyond baptism, Eucharist, prayer, and Bible study. But is it sufficient to say that practices are Christian because they are what Christians do?

This question is worth asking because what is at stake in the book's proposal is the specifically Christian formation of students in specifically Christian educational contexts. But the kinds of practices at issue are not religiously neutral, encoding a generic, featureless spirituality which becomes "Christian" simply by virtue of being exercised by Christians. Practices form persons according to particular narratives, particular visions of the "good life." The recurring arguments over the legitimately Christian use of certain forms of meditation, for example, are about whether the internal logic of such practices—the story they tell—runs counter to the formation of genuinely Christian faith and life.

How, then, is a given practice to be identified as "Christian"? One possible criterion might be membership on a "historic" list—a list appealed to (although never fully spelled out) by TCP. But this does not help us to understand why these practices form people as Christians. To their credit, the contributors to TCP pause often, as they narrate their experiences, to reflect on the significance of the practices they describe. For Rebecca Konyndyk DeYoung, for example, Christian practices contribute to "Christ-like" character and living. For Carolyne Call, hospitality involves "recognizing the stranger before us (as Christ or as the image of God)." For Julie A. P. Walton, in shared meals "Christians … acknowledge that all food is God's providential gift." For Ashley Woodiwiss, pilgrimage is "a form of spiritual worship." And so forth.

Implicit—and usually very far from the surface—in these accounts of Christian practices is their grounding in God as specifically identified, as truly revealed, in the mutual love of Father, Son, and Holy Spirit. At one point, David Smith signals agreement with Miroslav Volf: "Practices are Christian insofar as they are 'resonances' of God's engagement with the world." But God's "engagement" with the world has a form, a face: that of Jesus Christ. Practices such as testimony and hospitality, pilgrimage and liturgical time-keeping—not to mention baptism and Eucharist—conform persons to Christ as they enter by the Spirit into Jesus' concrete life of obedience to his Father, the God of Israel. Practices find their meaning and coherence in a community whose historical memory celebrates God's mighty acts on behalf of his people, culminating in Jesus, and whose anticipation of the future is animated by the Spirit of that same God. Practices open to personal and social experience often a foretaste of the world reconciled, renewed, and at peace within the triune God's embrace. Thus Christian practices affirm both the sacramental goodness of the created order and the transformative teleology of creation's redemption, as given and as promised by the Trinity.

This is a really fine analysis of TCP and the challenges to "Christian" education it reveals. In his concluding chapter, David Smith, in my view, gets at the central issue of contemporary Christian higher education: the failure of Christian "imagination" in institutions professing it. Jamie Smith also gets at this problem in Desiring the Kingdom. "Christian" learning must be "ex corde ecclesia," something we Catholic academics are told to believe but over which most of our ecclesiastical and academic leaders fidget and fuss and finesse into powerlessness. Take your choice: modernity and the Enlightenment and the German model of a research university or an unenlightened, confused postmodernism (not the helpful stuff Jamie Smith writes about in Who's Afraid of Postmodernism?) But what do evangelical colleges offer? If Christians are to understand the fullness of learning "ex corde," don't they need to be rather clear and consistent about "ecclesia," the 2,000 year old "ecclesia?"