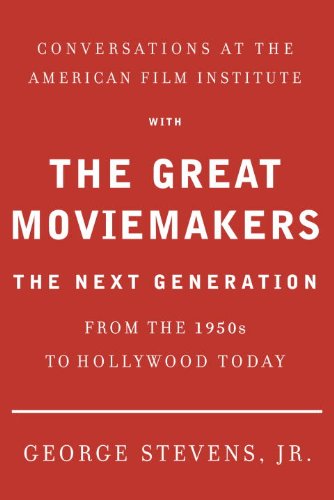 Conversations at the American Film Institute with the Great Moviemakers: The Next Generation
George Stevens Jr.
Knopf, 2012
768 pp., 39.95

Fishing for the Truth

What do storytelling and fishing have in common? A lot, according to filmmaker David Lynch. "The bait is just the desire for an idea. If you sit quietly, one will swim close and you might catch it. The big ideas are swimming very deep." Which prompts another question: "How do you know when to throw back the fish?"

That was, in fact, the next question when David Lynch was interviewed at a gathering of the American Film Institute. And his listeners were taking notes.

The AFI—an independent non-profit organization established in 1967 by the National Endowment for the Arts—promises to "preserve the history of the motion picture, to honor the artists and their work and to educate the next generation of storytellers." One of the ways they have accomplished this over the years is to host interviews with legends like Lynch, who directed Eraserhead, Blue Velvet, The Straight Story, Mulholland Drive, and television's Twin Peaks. The AFI calls this a "tutorial" approach.

We are invited into the inner circle in a new anthology of interviews edited by filmmaker and AFI founder George Stevens, Jr. Conversations at the American Film Institute with The Great Moviemakers—The Next Generation offers more than 30 in-depth interviews. A previous volume, Conversations with the Great Moviemakers of Hollywood's Golden Age: At the American Film Institute (Knopf, 2006), featured pioneers like Harold Lloyd and Billy Wilder. The new book examines half a century of work, with substantial testimony from Robert Altman, Roger Corman, Nora Ephron, Alan Pakula, Sydney Pollack, John Sayles, Steven Spielberg, George Lucas, and Francois Truffaut, to name only a few. And it isn't just about directing. Meryl Streep is here too, along with Gregory Peck, Sidney Poitier, Jack Lemmon, Morgan Freeman, and cinemtaographer Janusz Kaminski.

Some may shrug at the idea of a book like this. Hasn't the Internet turned into a fathomless cosmos (bottomless pit?) of celebrity interviews and commentaries on cinema? Sure, but this collection's value comes from the unique context in which the interviews took place. If Stevens' ulterior motive was to make us revere his institution, well … he's done a fine job. Cinephiles may get chills just imagining the 1969 gathering of the AFI's freshman class: twentysomething beginners that included Terrence Malick, Paul Schrader, and Caleb Deschanel. David Lynch, remembering those early days, says, "I thought for sure I'd died and gone to heaven."

One thing seems constant throughout—these artists have not lost any zeal for artmaking. Asked what movie he would make if he had "all the money in the world," Spielberg says he'd subdivide it and make twenty movies. William Friedkin loves filmmaking so much, if he was told he'd have to stand in line and pay money to direct, he'd "be the first guy in line …. Directing is playing."

Are you sure you want to know this stuff? Do you want to know about Friedkin's research for The Excorcist? Or how he made the car chase in The French Connection so terrifying? (If you value the safety of pedestrians and the authority of traffic laws, you don't want to know.) Do you want to know that Orson Welles got the inspiration for a scene in Touch of Evil while urinating alongside Charlton Heston in the basement of a "seedy old hotel"?

Speaking of Heston, he argues that film actors should be allowed to rewrite their lines during the production, as long as the lines "are honest and real." To the AFI audience, he adds, "Next time you have a writer in here, quote me and hear how mad it makes him." The interviews are full of bar-brawl starters like that.

And there's a pure physical pleasure holding this hefty volume in your hands, flipping pages back and forth from interview to interview, sampling one conversation, then another. Compared to Entertainment Weekly and YouTube clips, this book is like a national park. You can take leisurely hikes on any trail you want, jumping from Friedkin's description of film criticism as something that should be "wrapped around garbage" to the wisdom of legendary film critic Charles Champlin.

"Constantly compliment the actors," Friedkin advises budding directors. "They really are children." From the actor's side, Charlton Heston's perspective is more modest: "You have to fall somewhere between the [William] Wyler school of never praising the actor and the other school of pouring praise over him like a bucket of warm chocolate."

Some interviews generate heat. David Lynch tests the patience of his interviewer by refusing to share his interpretations of his films. Interviewer James Powers gets into a scrap with Paul Schrader over his portrayal of black characters in Taxi Driver.

If there's any frustration factor here, it's that some of these interviews are several decades old. Spielberg's interview is from 1975—before Raiders, E.T., or Schindler's List. But the timing of that interview produces some interesting notes—like this, for instance: "The things I didn't do in Close Encounters I'll do in the sequel." Sequel?

Women are poorly represented, but then, it's no secret that Hollywood remains an old boys' network. Nevertheless, editor Anne Coates, whose scissors shaped Lawrence of Arabia, Becket, The Elephant Man, In the Line of Fire, and Out of Sight, is an inspiration. Experimental filmmaker Shirley Clarke is snarky and self-confident, and she gives good professional advice: "One of the best ways to get unity from disparate images is to make sure the soundtrack has a strong throughline." I'm hoping the next volume will bring us Claire Denis, Sofia Coppola, Lynne Ramsay, Kathryn Bigelow, and Kelly Reichardt.

The more of these interviews I read, the more I got an unshakeable sense that all of the artists are motivated by something beyond the box office, beyond even personal ambition. Let's say they're drawn, not driven. All of them have a great reverence for the mystery that brings works of art alive. They know it has something to do with courage and excellence. They know it's a serious endeavor to tell—or, better, discover—the truth. "Truth," says Morgan Freeman, "is the default position for all of us."

Listen to Charles Champlin's religious zeal in describing film criticism: "What keeps me going is that constant hope of resurrection. You have to hope that the next one you see is the one that's going to knock you into the aisle and make you come alive and restore your faith in the medium."

"Experiment," says David Lynch, promising that it will "get you to some beautiful places." Playful experimentation produced one of Anne Coates' greatest editing sequences—the breathtaking seduction scene in Out of Sight, a masterful collage of non-chronological moments made by "getting a little more adventurous" and "matching things together."

Hitchcock famously complained that most "talkies" are "simply photographs of people talking." For this moviegoer, the book's strongest service to readers is its insistence that motion pictures can be about something more than narrative: images, sounds, rhythms, and juxtapositions that convey meaning beyond the reach of plot or paraphrase. Robert Altman, talking about Gosford Park, says he had two cameras moving through his complicated set "arbitrarily … with no particular purpose." Whatever for? "The standard thing with a film like this is a guy sitting watching television who gets up to go open a beer, and then comes back and he says, 'Did she kill him yet?' He knows he'll be shown the important stuff in close-up three times. But I wanted to put the audience on notice, right off the bat, that they have to pay attention or they're going to miss something."

Even George Lucas, an evangelist for Joseph Campbell and the power of myth, is surprisingly preoccupied with the play of image and sound. "Truly cinematic stories have to be rooted in the moving image, not literature," he says. "That's where the real art is."

Most inspiring to me was the testimony of an unfamiliar figure: director Ed Emshwiller. Emshwiller enjoys films that are "illustrated stories," but he argues, "I think there should be something else. There should be cinematic poets." For him, filmmaking is an intuitive endeavor. "I like to shoot, look at what I have and see what it tells me, and then shoot some more and put it together, moving forward step by step …. What's going on is a search." I thought of the protagonist of Walker Percy's The Moviegoer, who found on the big screen a sense of the transcendent, when Emshwiller described filmmaking as a "dance" with a mystery, as "encounter art."

Encounter art. I like that. Making a film with childlike curiosity might issue a summons to lovers, dreamers, and believers. It might even suggest how to read this book—exploring, with an openness to revelations in unexpected places.

Jeffrey Overstreet, author of four novels, has also published a memoir of "dangerous moviegoing," Through a Screen Darkly (Regal). He writes about film at LookingCloser.org and Image.