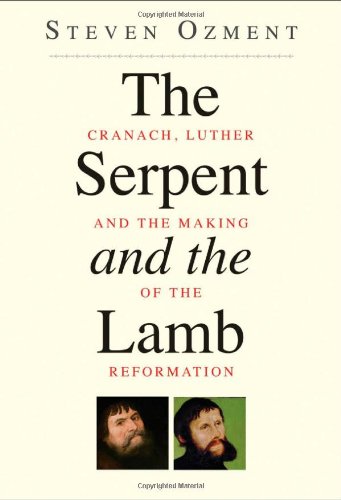 The Serpent and the Lamb: Cranach, Luther, and the Making of the Reformation
Steven Ozment
Yale University Press, 2012
344 pp., $40.00

The Faithful Presence of Lucas Cranach

A Lutheran understanding of culture and vocation.

Lucas Cranach the Elder has not fared especially well with art historians. The consensus is that his tremendous talent was wasted on his involvement with Martin Luther, compromising not only the integrity of his work but charting the direction of Protestant visual art as an aesthetically impoverished, disenchanted practice subservient to dogma and verbal explanation. But Harvard cultural historian and Reformation scholar Steven Ozment will have none of this. In The Serpent and the Lamb: Cranach, Luther and the Making of the Reformation, Ozment liberates Cranach from the confines of art history by offering a broader cultural framework within which to evaluate Cranach's historical significance.

Ozment's first step is to free Cranach from the long shadow of Albrecht Dürer, against whom he has been negatively compared by generations of art historians. Ozment goes to great pains to demonstrate that Cranach's talent and artistic achievement, especially as a printmaker, rivaled and even surpassed Dürer's—as the great master himself grudgingly acknowledged by supporting and recommending the young artist to Saxon Elector Frederick the Wise as his court painter. Ozment also argues that Cranach actively resisted the hubris of Renaissance humanism and rationalism, including its inflated conception of the artist as a creative genius, while at the same time working against the hegemony of its stylistic fashion. Ozment shows that Cranach's distinctive figures were the result of a self-conscious attempt to develop an alternative aesthetic vocabulary through a creative retrieval of medieval and Netherlandish styles. In addition, he imbued his subjects with a vulnerability and weakness that was profoundly Augustinian at a time dominated by the humanistic optimism of Erasmus. This humanism also encouraged artists and intellectuals to obsess over the inner workings of their emotional lives, a heady brew of self-preoccupation from which Dürer (like his Italian counterpart, Michelangelo) imbibed deeply. Cranach, on the other hand, seems free of such excessive introspection—a burden with which Luther himself struggled throughout his life. Because the history of modern art and the discipline of art history have been shaped by the myths of the artist as a tortured genius or unheeded prophet, Cranach feels palpably less "modern" than Dürer, and thus much less accessible.

Cranach's job-description as court painter for Frederick the Wise in Wittenberg also contributes to this inaccessibility. His duties included decorating the Elector's castles, designing and painting festival tents and uniforms, documenting hunting trips and his extensive relic collection, as well as making cake molds for birthday parties. This kind of workshop production has struck art historians as unbecoming of a fine artist. However, a recent article on Dürer in The Economist ("Portrait of the Artist as Entrepreneur," Dec. 17, 2011) reminds us that most artists, especially those working at the highest echelons of culture, are obsessed with getting paid, in part, because at those levels, payment is much more sporadic and asking for it much less becoming. And that goes for Dürer as well as Damien Hirst. Even though he held the more prestigious and less labor-intensive role as court painter for the Emperor Maximilian I, Dürer seemed to have more trouble getting paid than Cranach. Art does not exist without some kind of market. The task of any artist is to find—or create—it, yet art historians have been slow to accept the market as a defining feature of artistic practice. Art historians have also been troubled by the fact that Cranach's workshop was fulfilling commissions for Cardinal Albrecht of Brandenburg, who authorized the selling of indulgences that provoked Luther's 95 Theses, while he was also working closely with Luther. For these art historians, shaped by the modern myth of the artist as a single-minded prophet of freedom who speaks truth to all forms of coercive power, Cranach's work for not one but two ecclesial bodies represents a colossal breach of (modern) artistic integrity. But is that really the case? Ozment does not think so, arguing that Cranach

harbored no religious, artistic, political, or business "taboos." From his choice of friends (Luther and Albrecht), confessional associations (Protestant Wittenberg and papal Halle/Rome), and commissions (altarpieces and portraits per both confessions' wishes, Cranach was ever the willing, reliable middleman.

Indeed, Cranach's friendship with both Albrecht and Luther helped to moderate the tensions between the young Reformer, Frederick the Wise, and Rome, which helped Lutheran reforms establish a foothold.

Ozment also flatly rejects the art historical assumption that Cranach was seduced by Luther, and that his studio practice was diminished and compromised by his affiliation with the young theology professor and his radical agenda. Most art historians regard religious belief to be incompatible with historically significant artistic achievement. In the contemporary art world, art can question such belief, but it is ultimately to its detriment if it expresses such belief, or can be interpreted as doing such. (Art—especially modern art—is a jealous mistress who despises dalliances with other forms of belief.) Cranach is too richly embroidered into the cultural, social, religious, and political fabric of Wittenberg to be interpreted sufficiently by art historians shaped by these constricting modern myths of artistic practice. What is needed, Ozment shows, is a cultural historian.

Far from being compromised or constricted, Cranach flourished in and through his relationship with Luther, in large part because both the artist and the theologian shared converging interests and concerns, which, upon their meeting, made their relationship especially rich and productive, both personally and professionally.

This relationship developed only after Cranach decided to move his workshop into Wittenberg. Growing weary of the tedious demands of the court and a lack of challenging painting commissions (not to mention inconsistent remuneration), Cranach moved into the bustling university town, renovating several buildings for his home and workshop. He soon became a leading figure in city politics and one of the largest owners of real estate in town. A savvy businessman and entrepreneur, Cranach owned Wittenberg's only pharmacy and operated the most powerful printing press in the region, a press which would publish Luther's German translation of the New Testament, completed while he was in exile in Wartburg, and would generate the pamphlets and other printed materials that spread the ideas of the Reformation. Cranach was also a skilled statesman, traveling to the Netherlands on a diplomatic mission on behalf of Frederick the Wise. Far from being seduced by Luther, then, it was Cranach's robust and expansive public life and his wisdom in statecraft that served the younger, less politically astute Luther, ultimately winning him the protection and patronage he needed from Frederick.

Although Cranach shared Luther's anti-humanist and anti-Renaissance "Augustinian" view of the sinfulness and weakness of humanity, the convergence between the two men was less doctrinal than it was social, in what Ozment calls the "second phase" of the Reformation. This social phase focused on the recovery of the spiritual integrity of all aspects of domestic family life, from rearing children to marital sexuality. The home had been subjected to excessive and burdensome interference from Rome, creating legalistic burdens for laity and the clergy that were impossible to follow, the crushing nature of which resulted in licentious behavior that undermined the integrity of the family. Luther's emphasis on justification as a "passive righteousness," which he would develop in his lectures on Galatians in 1531, was already worked out socially and culturally, liberating the laity and the clergy to enjoy a robust family life, including an intimate sexual relationship within the institution of marriage. Ozment shows how Cranach and Luther both were fulfilled by their families, embracing fully and boldly the creational blessings of marital and familial life. Luther's famously earthy language about marital sexuality is echoed in Cranach's beautifully seductive women, whose enchantment was part of the created order and whose sexuality could be celebrated as a divine blessing. "By excising the external girth of the High Renaissance woman," Ozment writes, "he set free her inner mirth. The result was more engrossing than the direct touching of skin and flesh." Cranach and Luther's relationship was further deepened through their families, as they served as godparents to each other's children.

Ozment is at such pains to answer Cranach's art historical despisers that he even takes aim at Harvard colleague and art historian Joseph Leo Koerner, whose book The Reformation of the Image (University of Chicago Press, 2008) argued that Cranach's Wittenberg Altarpiece (1547) inaugurates the impoverished Protestant image that sacrifices aesthetic contemplation for dogmatic clarity. Ozment's interpretation, in contrast, emphasizes the social aspects of the altarpiece, the presence of Luther's and Cranach's family and friends, including his recently deceased friend, Martin, depicted at the Last Supper as "Junker Jörg," the alias he used when sneaking back to Wittenberg from Wartburg Castle at Cranach's urging to quell the iconoclastic uprising of Andreas Carlstadt. Luther, Cranach and his wife, Barbara, Philipp Melanchthon, and numerous other contemporary figures (both living and deceased) populate the altarpiece. In the famous predella, Luther is preaching "Christ crucified" to the congregation. While Koerner addresses the mysterious Christ image between Luther and the congregation, Ozment focuses on the congregation, which is made up of Luther's family, among them his widow, Katherine von Bora, and a beloved daughter who had preceded him in death; also present is the elderly Cranach with his arthritic painting hand, which emphasizes, in a particularly poignant way, his brokenness. For Ozment, the Wittenberg Altarpiece is not so much a visual condensation of Luther's Small Catechism, as Koerner argues, as it is a family portrait of those whose lives are hidden "in Christ," revealed and confirmed through the preached Word, Baptism, and the Eucharist.

Ozment's Cranach embodies a proto-Lutheran approach to culture and vocation. Apparently unconcerned with the burden of demonstrating or achieving his salvation through his work, Cranach was freed to use and enjoy his God-given talents as a painter, politician, businessman, and advisor. He is also a historical example of what James Davison Hunter has called, in To Change the World (Oxford University Press, 2010), "faithful presence." The Serpent and the Lamb makes the convincing case that without Cranach's faithful presence, the Lutheran Reformation would not have possessed the scope that it had.

Given his approach to his work, it is not surprising that the sincerity of Cranach's personal faith has been subject to considerable scrutiny—some argue that he was too dogmatic, others argue that he was an entrepreneurial mercenary, and still others see no evidence of personal faith in his work (and thus, by extension, his life) at all. For Cranach, in the end, the Christian faith is not what one does but what one receives. As an old man he receives the preached Word in the predella of the Wittenberg Altarpiece. In the Weimar Altarpiece (1555), which was finished by his son Lucas, Jr., he is the one who is receiving the blood of the Crucified Christ as a Eucharistic baptism. It is thus Cranach's refusal to look inward, instead turning outward for assurance, toward the Word and Sacrament, which makes him most distinctively Lutheran, Ozment concludes:

By all measures he was the best example the Protestants had of a "mixed" Christian soul evidently at peace with itself. And that also made Cranach the most eligible sinful-righteous Christian the Wittenberg painters could offer up to the redemptive bloodstream of their Savior.

As artists, writers, intellectuals, and culture makers, we should learn from Cranach's lack of inordinate introspection and self-absorption and rest in the finished work of Christ, which liberates us to exercise our vocations in gratitude to God and for our neighbor. Ozment's Cranach is free from the tragic urge, which has plagued artists for centuries, to seek justification through their work. For in the last analysis, in Christ, neither Cranach's work nor ours needs it.