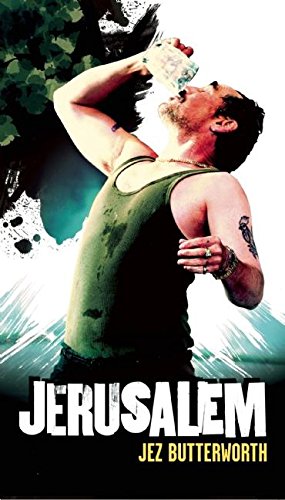 I first heard the buzz hovering around the playwright Jez Butterworth's Jerusalem shortly after its 2009 opening at London's Royal Court Theatre. The play, which takes its title from William Blake's visionary verses and Hubert Parry's well-known World War I hymn made from them—

And did those feet in ancient time
Walk upon England's mountains green?
…

I will not cease from Mental Fight
Nor shall my sword sleep in my hand,
Till we have built Jerusalem
In England's green & pleasant land.

—kept accumulating rapturous reviews, from its debut to its eventual move to the West End early in 2010.

Jerusalem would prove to be the latest example of a phenomenon that occurs only rarely in a generation of theatergoing—a singularly memorable combination of writing, directing, and acting. Moving from page to stage, a playwright's work, no matter how good it is, becomes caught up in the director's vision and in the impressions an actor makes. Furthermore, the writing must submit in the circumstance of performance to the sublime limitation that most defines theater as a human art form: it is utterly ephemeral. No matter how much a performer or ensemble puts its stamp on a play, eventually that production closes, and the play must await another group of humans to embody the text and give life again to the words. Of course that life will resemble the previous existence very little, if at all. For all of these reasons, I felt privileged to have attended the New York production of Jerusalem in the spring of 2011, which retained key elements (original director, many actors) of its earlier UK manifestations.

Critics singled out Mark Rylance especially for his performance as the main character, Johnny "Rooster" Byron, a hard-drinking, speed-taking, former motorbike daredevil who for two decades has lived in a trash-laden Airstream trailer in the woods outside of Flintock, in southern England. Rooster spends his time telling stories and selling drugs to the (fictional) ...