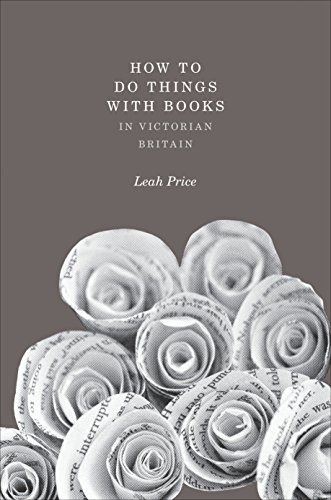 How to Do Things with Books in Victorian Britain
Leah Price
Princeton University Press, 2012
360 pp., 35.00

How to Do Things with Books in Victorian Britain

In the March/April issue, I devoted this space to Unpacking My Library: Writers and Their Books , published by Yale University Press and edited by Leah Price, a scholar at Harvard. This column continues the conversation, taking up Price's How to Do Things with Books in Victorian Britain , published in May by Princeton University Press.

If you are a literary scholar or a historian whose turf is Victorian Studies (the "thriving academic subfield" examined by Timothy Larsen in the May/June issue in his review of Charles LaPorte's Victorian Poets and the Changing Bible), you are probably aware of Price's book already. If not, you should add it to your must-read list. If you are interested more generally in the history of the book and reading, especially in connection with current talk about the state and fate of reading—if, for example, you enjoyed Alan Jacobs' The Pleasures of Reading in an Age of Distraction—you should read Price. And if you have noted the revival of "materialism"—as a creed, so to speak, in which the writer explicitly affirms his or her faith—you will certainly want to get this book.

Revival? When did "materialism" go away? It was unfashionable for quite a while to affirm "materialism" in academic circles, even as "naturalism" (say) remained untainted. There were always unrepentant holdouts, of course, but the notion had come to seem a bit crude (owing in part, perhaps, to unfortunate associations with "dialectical materialism" as the official philosophy of the Soviet Union). In recent years, however—not least because it had been mildly repressed—"materialism" has returned with a frisson. For two examples from a wide field, consider Daniel Tiffany's Toy Medium: Materialism and Modern Lyric and Stephen Greenblatt's The Swerve: How the World Became Modern. (The ecstasy with which Greenblatt's book has been received is instructive.)

But why talk about all this before plunging into Price's book? Because this is what the book is about. The context explains an otherwise puzzling sense that more is at stake here than meets the eye. "Like most literary-historical arguments," Price writes in her introduction, "mine has both a corrective and a creative ambition":

In negative terms, it seeks historical and critical distance from the heroic myth—whether Protestant, liberal, New Critical, or New Historicist—that makes textuality the source of interiority, authenticity, and selfhood …. In more positive terms, it seeks to recover stories that this myth overwrites: stories about women, children, and working class or non-European men who remained sensitive to the material affordances of books and, therefore, to the stories in which books themselves figured as heroes.

There are affinities here with projects which are in some respects quite different from Price's—with Alasdair MacIntyre's Dependent Rational Animals, for instance, and James K. A. Smith's Desiring the Kingdom. Price doesn't merely want to situate readers in particular settings (as opposed to the Ideal Reader assumed by a good deal of literary criticism). She wants to look at books and other printed matter as physical stuff that gets used for many purposes in addition to reading. Her book concludes by re-emphasizing a detail she's noted earlier: the widespread use of newspapers for wiping in the privy, before toilet paper was standard. "We've seen," she remarks, "what a small and unrepresentative fraction of any newspaper's life cycle was formed by its first day."

So, too, she wants to explore "[w]hat exactly it would mean to study books without privileging reading." Her alternative "history of the book" will refuse to focus narrowly on "the fraction of the book's life cycle that it spends in the hands of readers." At the same time, she has accumulated an enormous range of material about Victorian readers: how they talked about various kinds of reading, how they regarded books as physical objects, how these attitudes were inflected by class distinctions. My copy of Price's book is a thicket of Post-it notes. I have to stop myself from telling friends at Starbucks about this or that gem she's uncovered—her account of "it-narratives," for instance, in which objects of various kinds, books included, tell their own story.

On many current subjects in what might be called the national conversation about reading, Price has observations based on her "ethnography." "Once the feminization of reading in the present-day West is recognized as an anomaly in both time and space," she writes, "it becomes harder to explain by essentialist assumptions about women's greater capacity for empathy or imagination." Noting how contemporary social critics are often guilty of "overinvesting" in reading, giving it quasi-religious significance, Price remarks that, in Our Mutual Friend, Dickens had "already mocked the indiscriminacy" with which the word is bandied about: "An Actress's Reading of a chambermaid," Dickens wrote, "a dancer's Reading of a hornpipe, a singer's Reading of a song, a marine painter's Reading of the sea, the kettle-drum's Reading of an instrumental passage, are phrases ever youthful and delightful."

There are also frequent exasperations. Some of these are provoked by a habit of wild overstatement:

I want to suggest … that in the nineteenth century, the book came to feel like a burden. Printed matter was foisted upon, more often than given to; receiving a book now connoted powerlessness as often as privilege. That change doesn't just correspond to the increasing abundance of books themselves; too much information and too much paper were compounded by too much contact with fellow handlers. Every reader is cumbered by an excess of books, and every book by an excess of readers—each overwhelmed in turn by the consciousness that others have touched the same book that he or she is now holding, and thereby gain some hold over him or her.

This reminds me of some inadvertently hilarious accounts of "everyday life" emanating from France in the era of High Theory. Even so, the chapter which this passage introduces—Chapter 5, "The Book as Burden: Junk Mail and Religious Tracts"—is full of interest, particularly for evangelical readers. Price describes tract societies' "ambivalence about bunching readers into market segments. On the one hand, Evangelical groups pioneered niche marketing long before commercial advertisers began to copy them." (She then gives a list of examples: the Victorian equivalent of today's evangelical niche marketing.) "On the other hand, the Religious Tract Society worried that publications targeted too precisely could draw invidious distinctions." Yes.

At several points, more or less in passing, Price makes explicit an opposition that runs throughout the book: between "materialist" and "idealist conceptions of culture." I'm not sure precisely what Price supposes an "idealist" conception of culture to entail, but you get some idea from this passage:

Within a culture where book is to text as outside to inside, secular middle-class fictions and Evangelical tracts alike make the relation between those terms a surrogate for the relation of the material world to the inner life—whether that life belongs to their characters or to their readers.

While at some points, as we saw at the outset, Price frames her work as "corrective," the logic of her argument seems to suggest that one of these two conceptions is right and the other is wrong. "Materialism" tells us how things really are.

Thus I was surprised when I came to this sentence in Price's conclusion: "My argument could be taken as one very long footnote to Natalie Davis's long-ago reminder that the book constitutes 'not merely a source for ideas … but a carrier of relationships.' " Really? But never mind the argument. I agree entirely. Books are not merely sources of ideas. (I'm not sure who thinks they are.) They are also carriers of relationships, yes. And in fact it's often hard to say where the ideas stop and the relationships begin.