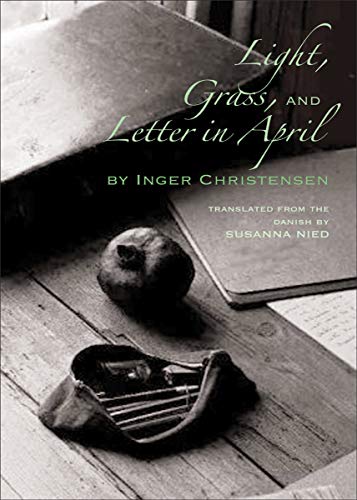 The poetry of Inger Christensen.

Last summer I read The Girl with … /The Girl Who … trilogy by Swedish crime writer Stieg Larsson. If you're looking for a fast-paced international thriller with a modicum of social critique, it's hard to beat Larsson's books. But if you're in the mood for something a bit more introspective, if you enjoy reading, re-reading, and re-re-reading marvelously turned phrases, stunning imagery, and wholly original figurative language, then I'd like to recommend the work of another Scandinavian writer, the Danish poet Inger Christensen (1935-2009). New Directions has released a fourth collection of her work, and in doing so they complete a project to make all of Christensen's poetry available to U.S. readers.

As the title suggests, the book includes three distinct collections: Light, the poet's debut collection from 1962, Grass, her second collection published a year later, and Letter in April, which appeared in 1979, after Christensen's intervening work had established her as Denmark's preeminent contemporary poet.

Christensen was 27 and a few years into her marriage to literary critic Poul Borum (also an important figure in 20th-century Danish literature) when her first volume of poetry appeared. Light announces the themes that Christensen would go on to explore throughout her career—love, otherness, nature—and reveals her fascination with modern painters such as Paul Klee, Jackson Pollock, and Marc Chagall. In fact, the first poem in the volume owes its imagery to Chagall's Clock with Blue Wing, a key point that translator Susanna Nied shares in her helpful introduction. Other poems hint at Christensen's literary inspirations, including two of her favorite poets, Arthur Rimbaud and Rainer Maria Rilke. The symbolism of the first and the rapid metaphorical associations of the second can be seen in this brief, untitled poem midway through Light:

Like slate-gray sea
my winter-flattened brain
sways in space

a flying lighthouse swings my fall-eyes ...