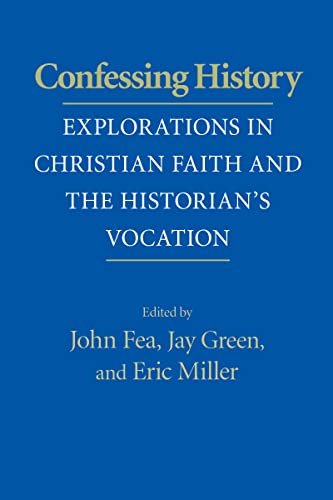 Confessing History: Explorations in Christian Faith and the Historian's Vocation

A New Direction for Christian Historians?

One of the worst kept secrets of the historical profession is what I am going to call Ambrose's Law, after American historian Stephen E. Ambrose. Ambrose's Law states that the more popular a historian is, the more other historians will criticize him or her. There is usually a good reason: Ambrose's chief crime was plagiarism, Joseph Ellis misled the press, David McCullough misquoted Thomas Jefferson, and Simon Schama barely noted the existence of Wales in his History of Britain. But these reasons are not the whole story.

Cynics would say Ambrose's Law is testament to professional envy. There's surely something to that. Then there are the perils of greater exposure that fame brings. (Other historians took aim at Ambrose long before the issue of plagiarism arose.) There are, however, more fundamental issues at stake, namely, can history that people actually enjoy reading or watching be respectable, accurate, and honest? Can popular history be good history? The question is about loyalty as much as anything: are these TV historians truly committed to what their guild values above all, careful study and truth-telling? Or have they sacrificed their integrity in order to pursue the wrong type of audience?

Confessing History suggests that there is a Christian version of Ambrose's Law, which the editors would probably call Marsden's Law. Their objects of concern are historians such as George Marsden and Mark Noll, who have won the respect of their profession. The worry is that by seeking success with that audience, Christian historians have failed to be sufficiently Christian. Again, the question is one of loyalty to one's fundamental commitments, but this time it is commitment to Christ that matters. One contributor to the book finds it "difficult to accept the ease with [which] colleagues at Christian colleges seem to regard the status, respectability, power and glory … that [come] with 'making it'" in academia, and wants "to figure out if the 'foolishness' of the Gospel … offers any insights into what a Christian intellectual might look like."

Confessing History begins with George Marsden, perhaps the most accomplished historian to come out of Christian collegedom in the last several decades. Marsden believes that Christian historians should study what all other historians do: what they can see in the historical record, and not what God might be doing behind the scenes. Eschewing providentialism, Marsden became a star, going on—after two decades at Calvin College—to teach at Duke Divinity School and then the University of Notre Dame. Many Christian historians took the same approach and did well.

But a younger generation are not sure this is the right path. In the introduction, Eric Miller summarizes their concerns in a series of questions:

Is something beyond the current consensus, as represented, for instance, in the work of George Marsden, possible? Is the mainstream historical profession truly the locus of the deepest wisdom and brightest hope for the practice of history? Have our lives as professional historians—and as middle-class professionals—become so straitjacketed that resistance to the status quo is futile? And what within the present moment holds most promise for the advance of a deeply Christian practice of history, whether through writing or teaching?

It would be too much to say that there is a new consensus among younger Christian historians, Miller goes on, but there is "at least a common inclination," which he describes as follows:

The modern search for explications of causality and agency through the analysis of "observable cultural forces" [Marsden's words] has proven to be an inadequate approach to the past for many in this generation of Christian historians, and, accordingly, an unsatisfying means to the fulfillment of our vocations. We seek instead to clothe history in rumination, conjecture, meditation, and judgment, all rooted in Christian visions of reality and all in the service of fostering moral intelligence and spiritual vigor in the communities we serve. Moreover, rather than turning to leading theorists of the modern academic disciplines alone for guidance, we find ourselves in consequential and intimate conversation with the work of theologians and philosophers, joining a tradition of reflection with ancient roots and one that continues strongly to this day, with or without the historical profession.

Two sections of the book put flesh on all this. The first is theoretical, and has five chapters that together present a call for Christian historians to care more about shaping their students and societies. Thomas Albert Howard seeks to marry history and virtue ethics, arguing that we should encourage students to face the moral questions raised by the past. William Katerberg makes a forceful argument for history that is useful for society. It should change students' hearts, not just the historiography. Michael Kugler surveys the histories written by David Hume, Edward Gibbon, and Mary Wollstonecraft, Enlightenment figures who wrote with a sense of social purpose that belies their era's reputation for facts alone. Bradley J. Gundlach calls us to assimilate moral insights from the likes of Christopher Lasch, Robert Bellah, and Jackson Lears. Christopher Shannon advises an overhaul of almost everything, including the abandonment of "the futile effort to build a better monograph" and "a complete reorganization of the undergraduate history curriculum" that would emphasize memorization and historiography.

The second section addresses what it would mean for historians to do this in the communities to which they belong. John Fea describes a class he taught at Messiah College in which he and his students struggled to come to terms with the moral issues raised by the American Civil War. Lendol Calder's chapter tells the story of a mountaineering disaster to show how shoddy assumptions often lead to educational disasters, and calls us to work harder at our teaching and thereby love our students more. Jay Green wants Christian historians to use their understanding of the past to address the public, thereby taking on the role of society's conscience. Robert Tracy McKenzie urges historians to win the ear of their local churches, rather than speaking only in the academy. Douglas A. Sweeney's chapter challenges us to see colleagues not as competitors in the academic stakes but as people we are called to serve.

The book contains great learning, mature reflection, and (most of the time) plenty of humility and nuance. Every Christian historian should read this book. I found the emphasis on teaching especially refreshing. Much of the discussion about Christian scholarship has focused on how to be faithful in the wider academic community; this book recognizes that many Christian historians spend a lot of time in the classroom, and challenges them to use the past to encourage their students to pursue wisdom and righteousness. Yet by the end of the book I felt that the sum was less than its parts. Many chapters sparkled, but the attempt to advance a new direction for Christian historians did not.

For one, there are chapters that strike startlingly discordant notes. Mark Schwehn says he still believes that the quality of his scholarship "should only be determined by [his] professional peers." James B. LaGrand argues that "preaching through history" is "an unsatisfactory model of Christian history." There are also chapters that bear an uneasy relationship to the project as whole, namely those by Una M. Cadegan, Beth Barton Schweiger, and Wilfred M. McClay. A book with evenly balanced groups that disagree can be fascinating and rewarding, but this one, with a central thrust and a handful of outlying chapters, has an awkward feel.

Then there is the question of how new this new inclination is. Some of the engagement with postmodern thought is indeed new, but Christian historians have been committed to loving students and addressing society for a long time. In his chapter, Doug Sweeney pays tribute to an older scholar who did just this and yet elsewhere in the book falls foul of Marsden's Law. The book is dedicated to John D. Woodbridge, who taught all three editors church history at Trinity Evangelical Divinity School and who cared deeply for his students and produced books for non-academic audiences. There is a long history to the argument over whether a Christian historian's first job is to move people or move the scholarly debate. Greater discussion of that history would have been useful.

There were times when I worried whether some authors were being fair to Marsden, Noll, and company. Katerberg is, giving Noll credit for work that has distinctly Christian aims. But people who read only parts of this book might conclude that the older generation of Christian historians were more interested in their guild than God. The evidence of their work suggests otherwise.

Earlier this summer I was having dinner in a pokey Chinese restaurant in Oxford with two colleagues. One belonged to George Marsden's generation, while the other was a similar age to the editors of this book. I had chatted with the younger one earlier in the week, and had heard him share a vision for scholarly work justifiable in terms of its usefulness to the church. Over dinner, however, the older scholar said that history had to be written with no eyes on the present. I don't think he knew that what he said was controversial at that table. But both colleagues believe they are serving God's good purposes. A few years ago, the same senior historian had told me of his hope that the books he writes will influence the church as teachers at theological colleges read his work and pass it on to future pastors. Just this spring, I heard of someone saying that Marsden's A Short Life of Jonathan Edwards was one of the most formative books he had read.

I would also have liked to see more exploration of the idea that different historians have different vocations, especially in a book that deals with that very concept. Might God not call some historians primarily to address the world and others to nurture the church, just as he calls some people to work for the state department and others to ordained ministry? Or what about the idea that the same historian can have a vocation to do both these things? That might help solve one of the puzzles of the book: its call for something different is typically tied to teaching, but it is much less clear about what the new inclination might mean for research and writing.

In sum, then, at times the editors over-egged the pudding. But there is wisdom aplenty in this book, and it will do what all authors hope their books will do—stimulate conversation.

Alister Chapman is associate professor of history at Westmont College. His book Godly Ambition: John Stott and the Evangelical Movement has just been published by Oxford University Press.

The first goal of a Christian historian should be accuracy about history. Study Bibles and commentaries are full of historical inaccuracies, especially with respect to prophecy. For example, most commentaries on Daniel still being used by pastors say that the Temple was rededicated by the Maccabees on December 25th, 164 BCE (some say 165 BCE), when the actual date was the 25th day of the Jewish month of Kislev, which is not the same as December 25th on our Gregorian calendar from year to year. That's just one example of hundreds of examples of historical inaccuracy that I have noticed being propagated in Christian circles over the years. Some will say, so what? But, if we are to interpret prophecy accurately, we must use accurate history to identify prophetic fulfillments. Otherwise, we end up with eschatological confusion.--Dan Bruce, The Prophecy Society