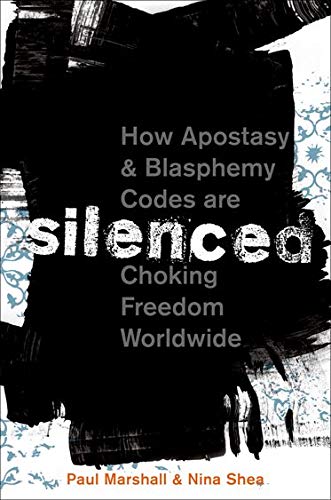 In contemporary America, the charge of "blasphemy" carries a distinctly archaic ring. It evokes images of a long-distant past, of Puritans in powdered wigs harrumphing at heretics. Who, nowadays, pronounces this peculiar anathema? Only, it seems, as an expression of mock incredulity does such old-fashioned language endure. "Thin crust superior to deep dish? Why, that's blasphemy!"

Elsewhere in the world, however, accusations of religious heterodoxy remain a deadly serious business. Especially in nations where the regnant orthodoxies belong to Islam, paddling against dominant streams of opinion can bring frightful consequences. Even, to an alarming degree, within the strongholds of Western civilization, Muslim sensibilities increasingly constrict the parameters of acceptable public discourse.

Paul Marshall and Nina Shea, representing the Hudson Institute's invaluable Center for Religious Freedom, have devoted many years to understanding and publicizing this malign phenomenon. Their exhaustive, courageous research is on brilliant display in Silenced: How Apostasy and Blasphemy Codes are Choking Freedom Worldwide. Marshall and Shea compile a thorough dossier of existing Islamic blasphemy restrictions, show how they operate to bludgeon dissent, and chronicle a concerted campaign to export them around the globe. That alone would be a worthy achievement. But in addition, Silenced provides a ringing defense of free expression, upbraiding those who would acquiesce—out of craven fear, or flaccid political correctness—to a climate of self-censorship.

Silenced takes the reader on an extensive tour of those nations, clustered in the Middle East, southern Asia, and pockets of Africa, where radical forms of Islam permeate law and culture. Marshall and Shea burrow beneath the blankets of religious repression under which these societies suffocate. In meticulous detail, they document how anti-blasphemy provisions ensnare non-Muslims, dissenting Muslims, converts to other religions, ...