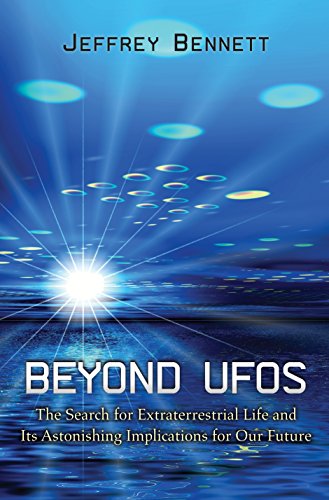 Beyond UFOs: The Search for Extraterrestrial Life and Its Astonishing Implications for Our Future
Jeffrey Bennett
Princeton University Press, 2011
248 pp., 23.95

Editor's Note: This article by the distinguished astronomer Jennifer Wiseman first appeared in the September/October 2011 issue of Books & Culture.

Will we, as Earthlings, ever find extraterrestrial life, and what will it mean if we do or don't? Those are the provocative questions explored by Jeffrey Bennett in Beyond UFOs: The Search for Extraterrestrial Life and Its Astonishing Implications for Our Future. While the title evokes visions of flying saucers and E.T., the book could perhaps be further subtitled "When Real Science Confronts Science Fiction" or "What Life Out There Are We Actually Likely To Detect?" Despite Bennett's hopes that alien civilizations exist, he makes very cogent arguments for why it is illogical that any such beings would dash in and out of our sights in the manner popularly attributed to UFOs.

What Bennett does present is actually much more exciting: the new science of astrobiology, seeking to determine what conditions both on and beyond Earth are conducive to sustaining life. We live in the most fertile time in history for discoveries regarding the universe, especially the burgeoning detections of extrasolar planets—planets orbiting stars other than our Sun. While just 20 years ago only a handful of extrasolar planets had been detected, the technology and techniques for finding these small bodies has dramatically progressed to the point where hundreds of extrasolar planets, mostly the large gaseous Jupiter-type, have been found, with a continuing focused goal of finding planets more and more like Earth. And this year, NASA's Kepler space telescope scientists announced over a thousand more candidate stars that are possibly hosting extrasolar planetary systems, the evidence seen from the periodic slight dimming of the star as an orbiting planet passes in front. From the Kepler mission's initial findings, it looks like at least a third of all stars have planets. Thus in the span of two decades we have moved from hypothetical extrasolar planets to real entities suitable for scientific study. We have even progressed from simply "finding" them to actually characterizing them, that is, determining simple descriptors like mass, radius, orbit, and the presence of an atmosphere.

Could any of these planets host life? Could we detect simple life forms as well as advanced life? Is Earth unique, or are planets like Earth common? These are the big questions now coming into the scientific viewfinder. The quest weaves together several branches of science. Starting with ancient Greek views of the natural world and then moving through Ptolemy, Copernicus, Kepler, and Galileo, Bennett first presents what "science" really is and how we now arrive at scientific conclusions. Then he turns to the basic biological questions: what exactly IS life, and how would we recognize it? The familiar schoolbook answers are no longer adequate. Even on our own planet, we are finding weird life forms—extremophiles—living under conditions that ought to kill everything; at the same time, we find "non-life" acting in some sense like life—reproducing, for example. Bennett concludes that life must share at least three properties: it creates order out of chaos; it makes copies of itself, but not quite perfectly (so variations can allow the natural selection of traits adaptive to changing environments); and it evolves through time.

And what does it take for a planet to be habitable for life? The simplest test is whether it is in the "Goldilocks" zone relative to its parent star, such that it is neither too hot nor too cold for liquid water (currently seen as one common need for all life) to be present. But Bennett describes how complicated the situation really is, with a planet's atmosphere, geology, radiation, history, oceans, and even feedback from life itself all contributing to environmental conditions that may support or extinguish sustained life, once it has begun.

Some of the environmental features increasingly understood as required for life to thrive can also, in certain settings, be catastrophic for life. Consider this: plate tectonics, responsible for horrific earthquakes, devastating countless lives, are now considered essential for recycling the atmosphere and regulating the temperature of "living" planets like Earth. Oceans "lubricate" the system, allowing surface plates to slide. Carbon dioxide from the atmosphere gets deposited to the ground by rain and dissolves into rocks and minerals that are carried to the sea, ending up in the sediments on the sea floor. As plates move, one plate can get subducted under another, carrying the sea floor sediments deep into the hot mantle of the continent. The hot material is eventually vented out into the atmosphere through volcanoes, completing the cycle. Without oceans, rain, and the motions of plate tectonics, the atmosphere would get overburdened with carbon dioxide. This is why Venus, it is posited, is an unbearably hot greenhouse planet, overburdened with thick atmosphere and unsuitable for life, even though it is also in the "habitable zone" around our Sun, as Earth is. Venus, however, has not had the benefits of oceans and plate tectonics to the extent that Earth has. In short, Earth life has needed plate tectonics, the same dynamics that also spawn the earthquakes that cause so much suffering.

Bennett bookends Beyond UFOs with a fundamental question known as Fermi's paradox: If life is indeed prevalent in the universe, and if even some of these inhabited worlds harbor intelligent civilizations, then why haven't we encountered them? Where is everybody? Having explained why reports of alien sightings and abductions are not credible, Bennett speculates on three possible answers to the paradox: we are truly alone in the universe; there have been many civilizations scattered throughout the galaxies, but—ominously—all of them "have destroyed themselves before reaching the point at which their technology could take them to the stars"; or, finally, Bennett's preferred solution: advanced life is everywhere, but we are not yet ready and able to detect it. If astrobiology continues to develop at its present pace, perhaps that will change.

Jennifer Wiseman is an astronomer, speaker, and author. After heading the Laboratory for Exoplanets and Stellar Astrophysics at NASA's Goddard Space Flight Center for several years, she recently assumed the role of Senior Project Scientist for the Hubble Space Telescope. She also directs the Dialogue on Science, Ethics, and Religion for the American Association for the Advancement of Science. The opinions expressed in this review are her personal views.