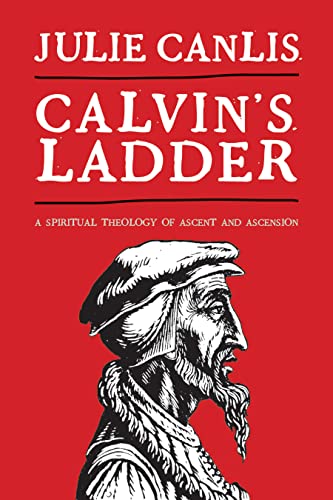 Living with the Triune God

A year or so ago, while I was reading Calvin's Ladder: A Spiritual Theology of Ascent and Ascension by Julie Canlis, the phrase "spiritual theology" in juxtaposition with the name John Calvin was, as a friend of mine likes to say, déjà vu all over again. Fifty years earlier, I heard for the first time the word "spiritual" used in association with the theologian John Calvin. It happened in New York City as I was listening to a lecture by the Quaker philosopher Douglas Steere in a series on "Spiritual Classics." The week previous, I had been in attendance at the first in the series, on Anne Morrow Lindbergh's Gift from the Sea. Intrigued, I was back for the second. If I had known of the subject beforehand—John Calvin's Institutes of the Christian Religion—I probably wouldn't have come. But after five minutes, I knew I was in the right place at the right time.

Although I had been a pastor for a couple of years, I had little interest in theology. It was worse than that. My experience of theology was contaminated by adolescent polemics and hairsplitting apologetics. When I arrived at my university, my first impression was that the students most interested in religion were mostly interested in arguing. Theological discussions always seemed to set off a combative instinct among my peers. They left me with a sour taste. The grand and soaring realities of God and the Holy Spirit, Scripture and Jesus, salvation and creation and a holy life always seemed to get ground down into contentious, mean-spirited arguments: predestination and freewill, grace and works, Calvinism and Arminianism, liberal and conservative, supra- and infralapsarianism. The name Calvin was in particularly bad odor. I took refuge in philosophy and literature, where I was able to find companions for cultivating wonder and exploring meaning. When I entered seminary I managed to keep theology benched on the sidelines by plunging into the biblical languages.

But midway through Steere's lecture, theology, and Calvin along with it, bounded off the bench. A new translation of the Institutes by Ford Lewis Battles (edited by John T. McNeill) had recently been published. I knew of the work of Dr. Steere and trusted him. But Calvin? And theology? After the hour's lecture, most (maybe all) of my stereotyped preconceptions of both Calvin and theology had been dispersed. Steere was freshly energized by the new translation. He talked at length of the graceful literary style of the writing, the soaring architectural splendor of this spiritual classic, the clarity and beauty of the thinking, the penetrating insights and comprehensive imagination.

The lecture did its work in me—if Calvin was this good after four hundred years, I wanted to read his work for myself. The next day I went to a bookstore and bought the two volumes and began reading them. I read them through in a year, and when I finished I read them again. I've been reading them ever since.

As I read the recently published Calvin's Ladder, my initial delight in Steere's lecture on Calvin, but this time not a surprise, was affirmed in spades—the Siamese twinning of "spiritual" and "theology." The defining adjective in the subtitle, "spiritual," is significant. Theology is about God, and God is Spirit—so why the adjective? Maybe because we have accumulated a lot of experience in the Christian community of persons treating theology as a subject in which God is studied in the ways we are taught to study in our schools—acquiring information that we can use, or satisfying our curiosity, or obtaining qualifications for a job or profession. There are, in fact, a lot of people within and outside formal religious settings who talk and write a lot about spirituality, things of the spirit or the soul or "higher things," but are not interested in God. There is a wonderful line in T. H. White's novel of King Arthur (The Once and Future King), in which Guinevere in her old age becomes the abbess of a convent: "she was a wonderful theologian but she wasn't interested in God." It happens.

So—spiritual theology, lived theology—not just studied, or discussed, or written about; not "God" as an abstraction but God in a participating relationship; not God as a truth to be argued; not God as a weapon to be wielded in the culture wars. Rather, the conviction that everything of God that is revealed to us is to be lived relationally in the dailiness of our human lives on this local ground on which we have been placed. Nothing disembodied, nothing impersonal, nothing in general.

And spiritual theology. God (theos) is the subject—not primarily me, not my potential, not how I can leverage some supernatural assistance into getting ahead, not using God as ticket to heaven, or to a better job, or to a compliant spouse, or to peace of mind. Rather, God in whose love I practice love, God in whose holiness I become more human, God by whose forgiveness and grace I become the person I am created and saved to be. Julie Canlis writes, "The purpose of this book is to consider what koinonia (participation, communion with the triune God) might mean for us in a century fractured by individualism, reductionism, and fundamentalism, and to consider what it might signify for a comprehensive, embodied, repersonalizing Christian spirituality."

What follows is a theologically astute, exegetically brilliant, and pastorally sensitive recovery of Calvin's metaphor of the ladder: Jesus' descent in the incarnation so that we can grasp and participate in his work of creation and redemption, followed by Jesus' ascent to the Father, bringing us with him in all our humanity, living the life of Jesus completely and robustly.

The metaphor of the ladder has a long pedigree, beginning with Plato but then picked up by Greek philosophers and Christian theologians to describe the ascent of the soul to God. The metaphor continues in many contemporary secular forms: "fulfilling my potential," "staying true to myself," various and assorted three-step/seven-step/twelve-step programs. But Calvin's Ladder demonstrates how Calvin radically re-imagines the metaphor. It is not about our ascent to God but our participation in Christ's ascent. As Canlis puts it, "In one deft move Calvin has relocated 'participation' from between the impersonal (the soul in the divine nature) to personals (the human being in Christ, by the Spirit." The narrative of Jesus now becomes our narrative, or, to put it differently, our narrative gets continued in the Jesus narrative. We become more human as we live the Christian life, not less. Just as the very humanity of Jesus is the means by which he reveals his salvation to us, our humanity is the means by which we enter into communion with the persons of the Trinity.

We don't fit Christ into our lives by fashioning programs of ascent, schemes sometimes designated "spiritual formation," getting closer to God, making our way to heaven. Rather, we are fitted into Christ's ascent. In him and by his Spirit we ascend to the Father. Apart from Christ we do not have an "in" with God. Calvin has only disdain for nonchristological schemes of ascent: "All who, leaving Christ, attempt to rise to heaven after the manner of the giants are destitute."

The ladder now becomes a metaphor that controls the entire Christian life. The programs and structures that we try to fashion in order to make something of ourselves turn out to look something like "playing house" compared to living in the large household of God, in which the Spirit provides the means through our presence and obedience to ascend to the Father. The Christian life in its entirety is marked by a return to God in the company of Jesus as we find ourselves included in the triune God of love.

Two features are critical in the ladder metaphor. The first is that the Christian life is relentlessly and persistently personal: words such as relational, mutual indwelling, sharing-in-being, participation, and communion collect around what George Hunsinger names koinonia-relations: "Kononia means that we are not related to God or to one another like ball bearings in a bucket, through a system of external relations. We are, rather, something like relational fields that interpenetrate, form, and participate in each other in countless real though often elusive ways." Nothing impersonal, nothing abstract, nothing in general; no role-playing, no posturing, no pretense, no condescension.

The second is that the Christian life is fundamentally a human life. God revealed in the flesh, Jesus, was very man, not disguised as human, not temporarily human. We do not live the Jesus life by minimizing humanity, either his or ours. We are not angels. Everything in Jesus' life, his human life, is livable by us. In the ascent and ascension, the Spirit takes us into the humanity of Jesus, bringing us with him in all his humanity, in all our humanity, to the Father.

For all who give direction or leadership in the Christian community, Calvin's Ladder is a superb rehearsal of what is involved in spiritual theology. In this culture, impoverished as it is in both spiritual and theological imagination, we need all the help we can get.

Eugene Peterson is the author most recently of The Pastor: A Memoir (HarperOne). His five-volume spiritual theology is published by Eerdmans.