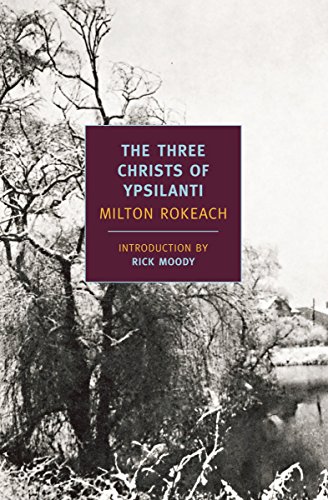 The Three Christs of Ypsilanti

When I was a small boy, I read an anecdote about three patients at an asylum, each of whom was convinced that he was Napoleon. It may have been one of those humorous bits scattered through the pages of the Reader's Digest. The story filled me with a wild delight. I'm sure I repeated it at the dinner table, and pressed it on any willing adult for days thereafter.

Over time, I bumped into variants. (One featured an inmate convinced he was Jesus Christ, trumped by another inmate who claimed to be God the Father.) And at some point—I don't know when—my sense of the scenario changed. I never entirely lost the joy sparked by the elegantly logical irrationality of the set-up, but that was held in uneasy tension with a desperate sadness. I had a glimpse of lives organized around a governing delusion, from which many further delusions followed.

"The three Christs met for the first time in a small room off the large ward where they live." That is the first sentence of Milton Rokeach's The Three Christs of Ypsilanti, first published in 1964 and reissued earlier this year by New York Review Books with an introduction by Rick Moody. It belongs on any list of the greatest opening sentences in American literature.

Milton Rokeach (1918-1988) was a social psychologist, not a novelist, but this book is far more absorbing than a lot of fiction. Here is the rest of the opening paragraph and the beginning of the second paragraph:

The date was July 1, 1959. All three had been transferred to Ward D-23 of Ypsilanti State Hospital [in Michigan] a few days before and had been assigned to adjacent beds, a shared table in the dining hall, and similar jobs in the laundry room.

It is difficult to convey my exact feelings at that moment. I approached the task with mixed emotions: curiosity and apprehension, high hopes for what the research project might reveal and concern for the welfare of the three men. Initially, my main purpose in bringing them together was to explore the processes by which their delusional systems of belief and their behavior might change if they were confronted with the ultimate contradiction conceivable for human beings: more than one person claiming the same identity. Subsequently, a second purpose emerged: an exploration of the processes by which systems of belief and behavior might be changed through messages purporting to come from significant authorities who existed only in the imaginations of the delusional Christs.

Striking, isn't it, how familiar this voice is: "It is difficult to convey my exact feelings at that moment." It might be Doctor Frankenstein addressing us. Note, too, how we learn, right at the outset, that it will not be sufficient for Rokeach's purposes to arrange that the "three Christs" should be brought together and put in close proximity. Even this will not suffice to cure them of their "delusional systems of belief and behavior." And so it will be necessary for the researcher to introduce "messages purporting to come from significant authorities who existed only in the imaginations of the delusional Christs." The full import of this intervention becomes clear only in the course of the narrative.

The three Christs—here called Clyde Benson, Joseph Cassel, and Leon Gabor, all of them diagnosed as paranoid schizophrenics—share the same delusion but are otherwise quite dissimilar from one another:

September 9. At the group meeting, I ask Leon if he would care to tell Clyde and Joseph his news. He announces that he got a letter from his wife, God Almighty, and that she sent him a dollar.

"I don't see how a woman can be God Almighty," says Joseph, "I think it's fictitious. Maybe it's been arranged before—might have been prearranged."

After some further discussion, Leon announces that he intends to spend his dollar on refreshments and a ball-point pen. He gives the cheap, taped-at-the-middle pen he already has to Clyde, who had expressed a desire for it, but then he takes it back, saying he needs it until he buys a new one.

You'll have to read the book to get their unfolding stories. (Warning: I could only read a few pages at a time: painful. But that may be an idiosyncratic reaction.) I will say, however, that the conclusion is an afterword (roughly three pages) added by Rokeach to a 1981 edition of the book. Here is one salient passage:

I would now … see the book as ending somewhat differently: while I had failed to cure the three Christs of their delusions, they had succeeded in curing me of mine: of my God-like delusion that I could change them by omnipotently and omnisciently arranging and rearranging their lives within the framework of a "total institution." I had terminated the project some two years after the initial confrontation when I came to realize—dimly at the time but increasingly more clearly as the years passed—that I really had no right, even in the name of science, to play God and interfere round-the-clock with their daily lives.