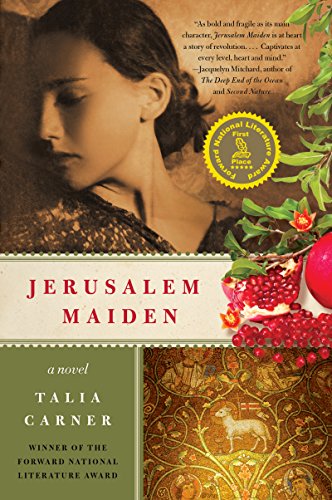 A novel in which self-realization rules.
September/October 2011

Other sins do eventually rush through Esther's door. Talia Carner, the author of Jerusalem Maiden, aspires to a certain kind of religious literary fiction, but at times her work feels like nothing so much as a beach novel of an innocent young girl going terribly off course in her life.

Esther is part of a Haredi community, a group of religious Jews who felt that they were hastening the coming of the Messiah by living as they believed ancient Jews had before them. Each of their actions, they believed, could affect God's determination of whether the world is ready for redemption. They shunned any kind of modern convenience and had little access to modern medicine. They looked down on other Jewish sects for singing and dancing. They rejected the idea of farming (even in times of famine), convinced that this was an activity only for non-Jews. And they were particularly harsh toward Zionists, who were modern in their outlook but also, in the Haredi view, trying to bring about a religious outcome through political ends.

No one in Esther's community is well off, but the women have particularly hard lives. The greatest fulfillment of God's commandments for a man, according to the sect, is to study Torah and the biblical commentaries. This means that women are left to do almost all of the physical labor, not only raising children, cooking and cleaning, and carrying water from the well, but also running the businesses and bringing in any money that a family can manage to earn. The men, meanwhile, are engaged in their studies, barely lifting a finger to help. Women are married off early—Esther's friend Ruth meets a tragic end after she is married at the age of 13 to a nasty widower.

By modern standards, then, Esther seems to have lucked out when she is married off to Nathan, a wealthy merchant from Jaffa who appreciates her independent streak, but she knows that her family sees such a match as the only way to get rid of a difficult daughter with no dowry. Ideally, women should aspire to marry the best Torah scholars, not men who earn a living in this worldly way.

Indeed, one can't help but feel sorry for Nathan, who seems genuinely kind and patient and perhaps even in love with his wife. Esther, meanwhile, pines for her art and never shares with Nathan her dream of becoming a painter (she assumes he would never understand). Meanwhile, she continues a sort of holier-than-thou act around Nathan and her new sisters-in-law. She sneaks off to paint at the beach but suggests to her new family that she continues to obey all of the laws of her former community—she thinks God has commanded her to set an example for them.

Esther is a difficult woman and a difficult narrator. It is hard to put up with someone, in person or in print, who thinks that God is always talking to her. But what is even harder to tolerate is the slippery slope of the narrative in Jerusalem Maiden. Of course, Aba may be right that one sin often leads to another. But, without giving too much away, are we really to believe that Esther inevitably progresses from what is admittedly a difficult existence, though one dominated by a loving family, to one in which she is engaged in an adulterous affair with a non-Jew in Paris and has abandoned her children almost permanently in order to pursue her passion for painting? Is the choice between religiosity and modernity so impossible?

Thoughtful Jews (and Christians) have concluded otherwise. But you'd never know it from listening to Esther. She is portrayed in the book as curious and knowledgeable (thanks in part to eavesdropping on her brothers' Torah study). But she (and in some sense Carner as well) comes off as hopelessly simplistic about the choices of religious people. Her art teacher encourages her to think not of the God who is active in her life, the one who is ever vigilant and often vengeful, but rather of "The Primordial Light" who lives inside her. And, over the course of her life, Esther does move closer to this view, though she is not entirely able to shake the God of her childhood.

Maybe I am asking too much. After all, this is a particular kind of novel in which the darkhaired Jerusalem maiden is going to fall for everything that is foreign—even a blond, muscular sculptor named Pierre. But in the midst of all of these clichés, how are we supposed to take her struggles seriously? When she decides finally to return to her children—only because one of them has had a terrible accident—she does so grudgingly. Though she has recklessly disregarded all of the rules of her childhood, she has managed to grow very little in the process:

You are a cruel, capricious God toying with the lives of my loved ones. I was a child when You took my Ima [mother] from me, when You inflicted untold suffering upon my brother Naftali. "You will not do this to me again!" she yelled, sobbing. "You don't get to harm my little boy and still keep my devotion! Hear?"

But Esther's devotion, at least in her adherence to God's commandments, has been gone for years. In the end, she still sounds like an adolescent who thinks the world revolves around her. Or maybe that's the artist in her.