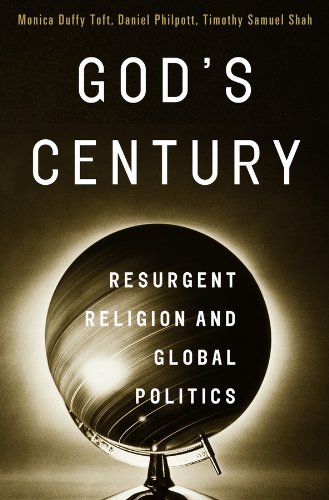 In June, at the University of Toronto's Munk Debates, Henry Kissinger and Niall Ferguson debated whether the 21st century would belong to China. Henry Luce, undoubtedly, would say it will be American like the last one. A few cheeky Canadians at the MacDonald Laurier Institute even said it would belong to them. But few would argue that this century will be God's. Daniel Philpott, Timothy Shah, and Monica Toft's new book God's Century may turn a few heads.

Mere decades ago, everyone (and I do not use that term lightly) was saying that God was dead—not as an idea, but as a practical political force. The latter half of the century was a long funeral dirge for the Almighty. But, not for the first time, God made a spectacular resurrection. Religious people will find the initial premise of God's Century an easy one to warm up to: religion is back.

It signals a mainstream shift when a big, popular press like Norton picks up top scholars like Toft, Philpott, and Shah who take religious resurgence as a given. The shift has been a long, slow, nail-biting revelation. But God's Century moves past it quickly. The meat of the book asks how that resurgence matters. Yes, God is back, but we really have no idea how that matters or if it's a good or bad thing.

The authors argue that two things will accurately predict how resurgent religion will matter in global politics: the political theology of the religion, and the relationship of religious and political authority in its context. Defining political theology is a thorny task. The authors say it is a set of ideas that a given religious community holds about political authority and justice. But if defining political theology is thorny, defining religion is a briar patch. William Cavanaugh, for example, argues in The Myth of Religious Violence that there is no transhistorical, transcultural concept of religion. Charles Taylor fills weighty pages in A Secular Age contending that religion as distinct from politics is an invention of the ...