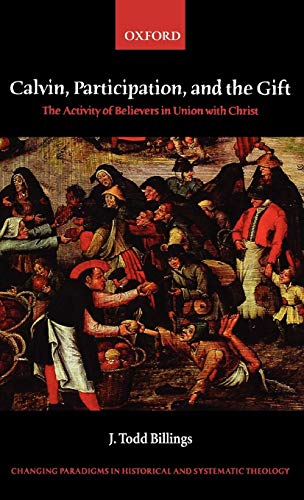 Believers in union with Christ.

John Calvin is not very fashionable these days. Scottish poet Edwin Muir (1887-1959) well captures the antipathy his name arouses in many quarters:

King Calvin with his iron pen,
And God three angry letters in a book,
And there the logical hook
On which the Mystery is impaled and bent
Into an ideological argument.

Scholarship, in its attempt to do Calvin justice, often perpetuates this very caricature. Battle lines are drawn. Defenses are fortified. Books and articles are produced at a furious rate on all sides of the debate. And Calvin himself is impaled and bent into an ideological argument.

Several years ago, Todd Billings entered this scene of conflict with a remarkable first book, Calvin, Participation, and the Gift, an ambitious attempt to remove one "logical hook" that has impaled Calvinism for too long. Billings challenges the long-held stereotype that Calvin's God is systematically opposed to humanity—a tyrant whose power excludes all human initiative and whose "grace" is irresistible to passive sinners. The key word that Billings uses to challenge this alleged passivity is "participation," a philosophical term with a long history and, perhaps surprisingly, plenty of scope and place in Calvin.

Perhaps this book never would have been written had it not been for the claims of various theologians of "the gift" that Calvin and participation are irreconcilable opposites. This piqued the curiosity of Todd Billings, who hitherto had little interest in Calvin. Contemporary academic fascination with the nature and far-reaching implications of gift-giving began in anthropology and spread from there to other disciplines. In theology this inquiry has centered on an understanding of salvation as gift, with the proviso that unilateral gifts are essentially destructive in nature. As the Trinitarian model for love is reciprocal and self-offering, so the argument goes, the gift of salvation cannot be unilaterally given to the sinful recipient, but must involve the dignity ...