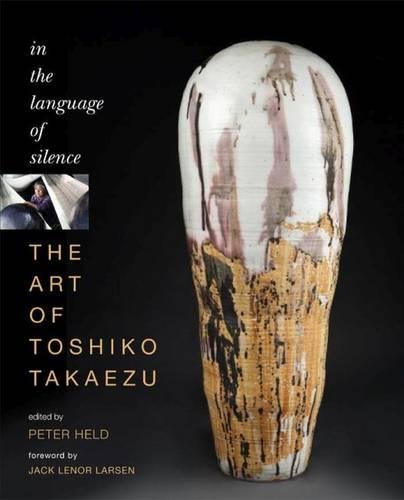 The Art of Toshiko Takaezu: In the Language of Silence

The Art of Toshiko Takaezu

Going through the pages of the lovely The Art of Toshiko Takaezu: In the Language of Silence, a newly released, posthumous survey of Takaezu's works, edited by Peter Held, I immediately began to sense a kinship. Her process-driven creativity produced a remarkable array of objects, ceramics, pottery, paintings, tapestries, and other works that seem, even on the flattened reproduced photograph, alive and resonant. I have journeyed with traditional Nihonga art (Japanese-style painting tradition) and attempted to blend the ancestral method with new, even avant-garde, forms of expression; similarly, Takaezu created a unique hybrid of Japanese ceramics and contemporary expression. Through the book, I was introduced to her world, as I had not seen her works firsthand and the photographs were my entry point; even so, I began to see profound overlaps between what I have intuited as an artist and Takaezu's language of art. I read that many of her vessels are famous for being "closed," meaning that she only left a pinhole on top to allow heated gas to escape during firing and the object is rather useless. Her works refuse to be categorized, causing many museums to be confounded as to where to place them; likewise, my works hover between contemporary and traditional, modern and medieval. Perhaps I had never heard about her precisely because she is so hard to categorize; there is simply no easy mechanism to gain an audience for works such as this. I know that battle all too well.

Takaezu's large ceramic "pots" are englobed unto themselves, an impossibility of a pot, completely mute to the world. In such "uselessness," her works instinctively explore the origin of what art can and could be. They stare into our propositional, utilitarian culture. If you are lucky enough to hold one of her works, you'll find that they turn into bells: sound echoes out of them as you shake them. There is a small picture on the opening page of this book which shows Takaezu standing with, and almost embracing, a large ceramic piece as if the object was a friend. I imagine her gently tapping the surface of the piece. The gentle reverberation spreads out into the world and disappears, and somewhere in the woods behind her studio in Quakertown, New Jersey, the vibrations are still echoing.

Those faint echoes persuaded me to make a trip to Princeton myself one hot summer day, where Cary Liu, the curator of Asian Art at the Princeton Museum, took me for a tour. Takaezu taught at Princeton for some time, receiving an honorary doctorate in 1996; thus, the Princeton Art Museum became the logical place to hold her last retrospective while she was still alive.

Cary Liu wrote an essay for her retrospective catalogue (an excellent essay which, unfortunately, is not included in this book). "In Zen Buddhist and Daoist thought," Liu reminds us, "it is in emptiness that usefulness is found. A ceramic bowl in and of itself is useless; only its empty center, where substances can be collected and shaped, provides function."

Takaezu's works are like Zen's koan: they pose questions more than give answers. Encountering her ceramic pieces forces us to reconsider the notion of what a work of pottery or ceramics really "ought to be." Her works are metaphysical questions, imposing but delicate, stubborn yet welcoming, allusive and weighty.

What are these objects, if not utilitarian ceramic pieces?

Are they wombs, or bombs?

In the cooled storage unit of the Princeton Art Museum, I stood in front of these loaded questions, now neatly placed on shelves. Cary told me that Takaezu is known to have written words inside of the each pot, but to her last days, she never revealed what she wrote. Her message is inside out, outside in. William Blake wrote in Jerusalem: "There is a Void, outside of Existence, which if enterd into Englobes itself and becomes a Womb."

Takaezu's pieces are wombs of silence.

In the Language of Silence is a beautiful book.

For artists like Takaezu, deeply attuned to the embodiment of the created object, and with particular emotion invested in the imperfections of surface and materiality, the challenge lies in the printed and digital documentation and reproduction of such work. An inherent frustration resides in the translation of the painting, sculpture, or installation into a photographic, flattened representation of the work. I consider it an artistic success as a painter when the photographer who takes photos of my paintings utters, "this is impossible to photograph!" I've decided that such a frustration is part of my goal: to create a surface that is impossible to flatten. Though a good reproduction, paradoxically, recognizes the inherent frustrations and limitations of the editing process, translating the work to a page or digital image is comparable to the way that a good translator navigates from one language to another.