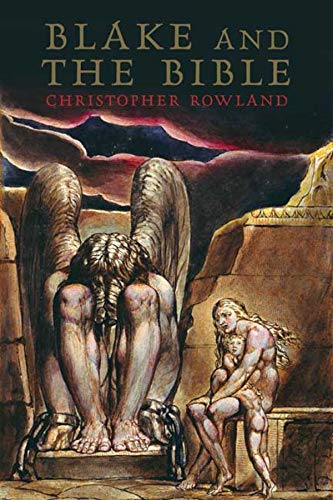 Unto Thyself Any Graven Images

Christopher Rowland's Blake and the Bible is misleadingly named, since it says next to nothing about Blake and the Bible; instead, this is a set of extended captions to Blake's visual work, such as one might find on a placard affixed to a museum wall, but Descriptions of Blake's Drawings on Biblical Themes and the Prophetic Tradition in 18th Century London lacks the felicitousness of the former. Gather those placards for his etchings and illustrated books (but not for the paintings), flip though them, and you have this book, more or less.

William Blake was not only a painter and a poet, but considered himself a prophet of God, and thought every Christian should be one too. His work has attracted critical attention from its earliest days, and his body of poetic work is among the most-considered we have in English. Entering a critical arena so staffed with strength is then, itself, a bold—almost an aggressive—act, but Rowland is a bit timorous as a scholar. Often, rather than make a claim, he'll merely hint at a possible interpretation. His main method for this interpretation by implication is the questioning parenthetical, as in "There are also four cherubs at God's side (the four Zoas?), and above, two smaller angels," as though the statement, taken directly, would be too direct.

Sometimes, the evasion is harmless: "in the margins [sic] we have angels with trumpets possibly proclaiming a solemn moment." Others are rather more glaring: "Job's head is turned … looking heavenwards before a stone altar, seemingly offering a sacrifice" [italics mine]. When people see a stone altar and a flame on top of it, the smoke rising up to a celestial presence whose rays beam back as though receiving it, and penitents kneeling before it, that's definitely a sacrifice scene; there isn't any ambiguity present.

Sometimes, the waffling is downright silly. Having described one engraving in which "the open palm of the Almighty, which faces the viewer … has a mark at ...