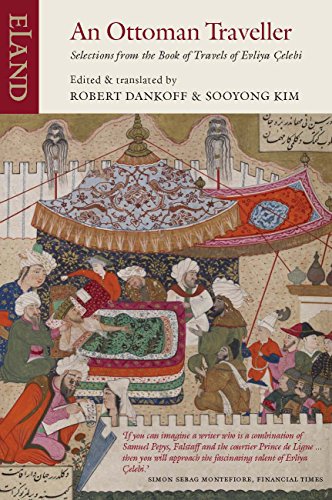 The omnivorous curiosity of Evliya Celebi.

Evliya Çelebi's Book of Travels is too long to translate, and too big to write about.

The Travels made its own long journey into print. Evliya Çelebi settled in Cairo the mid-1670s for the last decade or so of his life, and finished his memoirs by 1683. The manuscript was first read in 1742, when it was transported to Istanbul and copied. It took over a century and a half for a complete, printed Seyahatname to appear, and that edition was as long in the press (1896-1938) as Çelebi was on the road. Most Turkish readers know the Travels in that version, or in condensed translation in modern Turkish. The authoritative, unbowdlerized, and corrected Book of Travels in the language of its composition was published between 1999 and 2007.

Çelebi's path into English also has that hint of romance. Around 1804, a German-English aristocrat, Joseph von Hammer, ran across a manuscript of volumes 1 through 4. Thinking he had the whole work in hand, Hammer issued excerpts in German translation starting in 1814. Between 1834 and 1850, he released his abbreviated English version of volumes 1 and 2: Narrative of Travels in Europe, Asia, and Africa, in The Seventeenth Century, by Evliya Efendi, translated from the Turkish by the Ritter Joseph Von Hammer. That, plus a mid-20th-century version of Hammer's translation titled In the Days of the Janissaries: Old Turkish Life as Depicted in the "Travel Book" of Evliyá Chelebí, ...