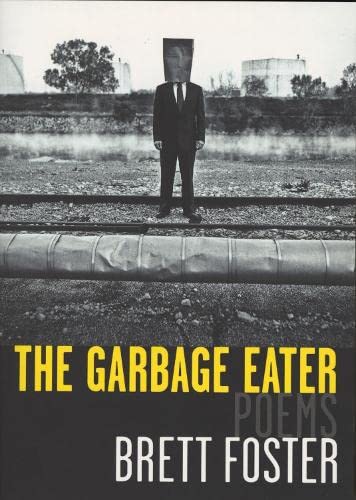 How to love a fallen world.
November/December 2011

In one sketch from last year's TV show Portlandia, a satire of the West Coast hipster life, Carrie Brownstein and Fred Armisen play a dumpster-diving couple who've gone just a little too far.

"Companies throw out perfectly good products," Armisen says in a smug voiceover, un-earthing a box of junk. "Americans are wasteful." Meanwhile, knee-deep in refuse, Brown-stein discovers a section of shiny dryer duct that would make a perfectly good sleeve for a one-sleeved shirt she has at home, and Armisen struggles into a child-sized sweater. Pushing a shopping-cart full of this stuff home, they plan a dinner party of decaying "curry-lentil-cabbage-cumin stew," and when all their guests cancel, they even find a replacement guest at the dumpster.

The speaker in the title poem of The Garbage Eater , Brett Foster's first collection of poems, doesn't share Armisen and Brownstein's giddy joy at dumpster diving. A member of a secretive cult, he eats garbage not to save money, to be "green," or to show off his thrifting indiecred, but to mortify the flesh:

I shaved my hair off, wore a wreath
to scar my forehead bloody. Under my chin
a beard hangs in a tangled mess. I'm homeless—
eat the world's crap, sleep in tarpaulin,

The physical means nothing beneath
the small fear of dying, which fears
only unworthiness more than death.

This garbage eater isn't hoping for a good find. Foster, of course, doesn't share his garbage eater's frank and knowing distaste for the world. What poet could, really? If a love for earthly things is not required to write a good poem, surely it helps. And maybe that's why it's the image of the Portlandia dumpster divers that has stuck with me when I think of Foster's poems, rather than the joyless legalist of the title poem. The hopefulness with which they dive seems analogous to the task the poet faces when choosing a subject for his poems, even if the poet is not so naïve.

Take for instance "Meditation in an Olive Garden," in which the poet makes this process explicit. "No Mencius-threaded grove restful with panpipes and shepherd life, / just the chain restaurant off Sherman Street," the poem begins, setting up a contrast between high and low culture. The restaurant attempts to imitate the poetic pastoral with its "lively, prerecorded violins' piazza overtures." But the world in which a poet might be able to unpack his allusions from a neat classical and biblical box is gone, smashed to pieces by the modernists and certainly not reconstructed by subsequent generations.

In this world, the image that stays with the speaker is not the pastoral idyll, nor the fake pastoral idyll, nor even the garbage food, "a moscatelli entrée a million people eat every day," but the "atomic flock of flies" on the window. Whatever poetic thoughts the speaker might have planned for the title's "meditation" are gone, and the poem is left to make do with what's actually there. "It's been one week and near my neck I hear their buzzing still," the poem ends. Wordsworth's definition of poetry as "a spontaneous overflow of powerful emotion, recollected in tranquility," is still relevant here, only what's re-collected here is garbage (food, flies), and the speaker knows it. But does that diminish the poem's pleasure? No. The flies are minutely observed; the poem maintains a bemused tone that I find endearing. "It's okay that we're eating in this terrible restaurant," the poem seems to be saying. "Let's still look at what weird disgustingness is actually here."

This is one way to answer the question of how to love a fallen world. And Foster does love it, I think. In his "Trashy Elegy for the Queen of Shock Rock," a poem for Wendy O. Williams, lead singer of the Plasmatics, he moves from "Ducttaped nipples / or clothespins pinching" to reflect that the album cover images "help us imagine / what wild spirit / flaunts that body." Calling the poem a "Trashy Elegy" seems a little disingenuous to me. Despite the occasionally trashy subject matter, the poems are clean, well-crafted. Nothing about the poems themselves is trashy, decayed, grotesque, overblown. Foster's language is occasionally blunt to the point of being dull—"Teased mohawk means / she does drugs," he says of Williams—but to err on the side of bluntness is a gamble that pays off elsewhere, especially in the brief narrative poems (or maybe they are lyric poems with a narrative bent), such as "Evening When the Secret Vanished," "A Confession Kind of, a Kind of Prayer," and "The Foreman at Rest."

In these poems, the blunt tone allows for a deep-seated tenderness totally lacking in sentimentality. And it sticks with you. In the poems with religious subjects—"Via Negativa," "The First Request of Lazarus," "At the City Church of San Francisco," "The Advent Calendar"—Foster's keen eye and restless intelligence bring freshness to the language of faith. "How to preach with so much that's beautiful / around us?" he asks in "At the City Church of San Francisco," set in an outdoor worship service. It's a question worth spending some time with, and one that addresses how a poet might belong in a church community, anyway. Far from renouncing the world, the faithful poet is there, setting himself the task of rummaging through the world to find beautiful things, half-listening to the sermon. It's a good place to be.