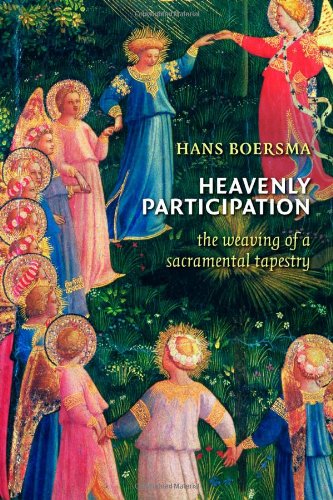 Evangelical lamps are sputtering. Prognostications of the movement usually announce its impending death as a threat, unless it makes the changes for which the given prophet calls. Such proposals include filling lamps with expired postmodern vinegar, or insisting they be replenished with the coagulated liquid of old-time religion. Hans Boersma's book Heavenly Participation: The Weaving of a Sacramental Tapestry affords a different response. Boersma offers the rich, luxuriant oil of medieval metaphysics to keep evangelical lamps warmly aglow. Boersma is not a fringe figure. It's somewhat symbolic that he holds the J. I. Packer chair in theology at Regent College. Could this kind of neo-medieval evangelicalism hold the same potential for the movement as did the broadly Reformed perspective of Packer?

Boersma, of course, is not the first evangelical who has made progress by looking back. Robert Webber famously discovered the liturgical rhythms of the early church, and Thomas Oden's "paleo-orthodoxy" project, centered in Christianity's first millennium, gave rise to the Ancient Christian Commentary series. John Milbank and the Radical Orthodoxy movement do much of the heavy lifting for this perspective, telling a story of ancient richness and modern, secular decline, a story helpfully translated into an American idiom by James K. A. Smith's Introducing Radical Orthodoxy (Baker Academic, 2004).

These relatively contemporary figures, however, can themselves be situated in a much broader—I am tempted to say inevitable—trajectory of American Protestantism. One thinks of the Mercersburg Theology of the mid-19th century, born when John Williamson Nevin—a brilliant student of the staunch American Calvinist Charles Hodge—re-discovered the Real Presence in the Eucharistic theology of John Calvin after nearly converting to Catholicism. Harriet Beecher Stowe records the same impulse, as Protestants migrated from cold New England meetinghouses to the neo-Gothic ...

Please keep in mind that the book we are discussing is not academic. It is the result of Richard Mouw urging Hans Boersma to translate an academic book for a more popular, evangelical audience. I think they can handle it. What they might not be able to handle is a lengthy exchange like this one from old college friends who should be discussing this privately, so why don't we give it a rest?

Oh, I still stand by my perception that Boersma's project is "somewhat abstruse." Let's face it, Matt, ontology isn't exactly the kind of thing routinely discussed in church small groups or adult Sunday school precisely because it's difficult to understand. When I said I'm all for Evangelical ressourcement that should not be interpreted as a concession about its potential for the Everyman Evangelical. It's an academic movement, as your evidence (books and centers) suggests -- not a popular movement among the laity. One further point of clarification. Yes, Protestants should turn to Catholics and the Orthodox to supplement what is missing from their own tradition with the stipulation that it is in keeping with the distinctives of the magisterial Reformation.

Wonderful then. We are now closer to agreement. You began by saying that Boersma's project, as I represented it, is abstruse and without potential for the "Everyman Evangelical." But now you say, "I am all for Evangelical ressourcement." You're rightfully worried about Protestants who hate their own tradition. So am I, which is exactly why I aimed to counter unidirectional fascination by supplementing Boersma with more Protestant sources. I am not suggesting that we should only look to other traditions to confirm what we already have in our own (there we may disagree). But with you, I affirm that Catholic and Orthodox Christians can, and have, been enriched by certain Protestant insights, such as the priority of grace.

I'm under no illusion, Matt, that "our own traditions are perfect and unalterably sufficient." Believe me, I welcome Catholic and Orthodox voices than can deepen, awaken, or supplement the resources we already have as Protestants. Just as we should be vigilant against what you call "smug Protestant self-sufficiency," I'm aware of two other dangers: triumphalist Catholicism or Orthodoxy and Protestant anti-Protestantism. In the case of the former, some Catholics and Orthodox do not believe Protestant voices can deepen, awaken, or supplement their own resources because they are older and wiser. In the case of the latter, some Protestants are so negative about their own heritage, seeing little to celebrate and affirm, that they propel–intentionally or unintentionally–disenchantment, resulting in either atheism or conversion to another Christian tradition. So, I am all for Evangelical ressourcement so long as it does not undercut the distinctives of the magisterial Reformation.

If you're not convinced by my short review, I encourage you to read the book itself and decide for yourself if you find Boersma's answers satisfying. Of course, you're under no obligation to do so, but it address the questions you are bringing up. The point of the ecumenical movement is to disabuse us of the notion that our own traditions are perfect and unalterably sufficient. My point in mentioning Calvin Barth and Edwards was to remind us that there already are touch points for the kind of thinking Boersma promotes within Protestantism. This was not meant to encourage smug Protestant self-sufficiency, but to further encourage church unity, and to discourage people from feeling that appreciation of early Christian thought necessitates conversion to Orthodoxy or Catholicism. I think you underestimate the ability of general readers to keep up with these debates. I remind you that the book under review is already itself a popularization of a more academic publication.

Yes, I know you referenced the three figures in your review. So, I'm still wondering why Evangelicals should turn to the medieval atmosphere for ressourcement when they've already got Calvin, Barth, and Edwards? On a separate point, unless you can offer examples of how neo-medieval evangelicalism has impacted the church in practical ways, I'm not convinced it holds potential for the movement outside of the academy. Books and centers alone don't qualify as "potential" in my mind.

That was exactly the point of my review. You'll recall I referenced the three figures you mentioned: Calvin, Edwards and Barth with just the point you had in mind. I make the same point in the correspondence regarding this review in the current B&C.

With all due respect, Matt, I don't think you satisfactorily answered (a) how "sacramental ontology" can be implemented, practically, in the life of the church and (b) why Evangelicals should turn to the "medieval atmosphere" for ressourcement if "sacramental participation...belongs as much to–and can even be found in–Protestantism." Why not bolster the Protestant figures – Calvin, Edwards, Barth – who share an affinity with Boersma's project? A "rising tide of books and centers" doesn't convince me that "neo-medieval evangelicalism" holds potential for the movement unless the movement is narrowly restricted to the academy. Those books and centers only reinforce my perception that it's a development, even a fad, within the academy.

Matt: You've written an erudite and somewhat abstruse review on a topic that's mostly over the head of this layman. Here's a "view from the pew." Outside of the academy, where this discussion is going on, I have trouble imagining how "neo-medieval evangelicalism" holds potential for the movement. Will the Everyman Evangelical actually be "'re-sourcing' Scholastic faith with ancient Christian thought"? How can "sacramental ontology" be implemented, practically, in the life of the church? If "sacramental participation...belongs as much to–and can even be found in–Protestantism," then why should the heirs of the Protestant Reformation turn to the "medieval atmosphere" for ressourcement? You summarized Boersma's project with the phrase: "Doctrine divides, metaphysics unites." My rejoinder, albeit simplistic, is this: "Doctrine divides, Christ unites." Doesn't participation in Christ unite "truths now polarized–Scripture and tradition, faith and works, Eucharist, and church"?