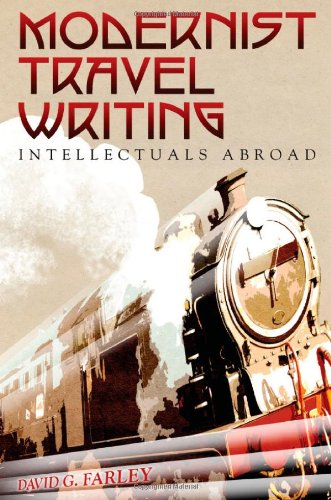 On the other hand, we have been reminded, by people as diverse as the medieval Cistercians (who discouraged pilgrimage) and Henry Thoreau (who said explore your inner spaces before exploring outer ones), that spiritual and intellectual quests are also a form of travel. The greatest discoveries, they argue, are not over the horizon, but within the soul and mind.

But why not both? Why not put both body and mind in motion and allow them to feed each other? This, David Farley claims, is exactly what some modernist writers did in the middle of the 20th century. In Modernist Travel Writing: Intellectuals Abroad, Farley explores the travel and the writing of four modernists: Ezra Pound, E. E. Cummings, Wyndham Lewis, and Rebecca West. He claims that the latter three especially traveled to distant places in order to gather material for thinking about the crises facing the Western world in the years between two great wars. They were trying, says Farley, to bring something back—from Russia, Northern Africa, and the Balkans—that would be helpful in the more politically engaged forms of modernism that informed the 1930s.

Farley begins with Pound, a writer whose life illustrates as well as anyone's the intimate link between modernism and travel. Literary and artistic modernism came about, in no small part, because writers and visual artists and musicians and dancers and impresarios from all over the world traveled to and shared lives together (sometimes briefly, sometimes for decades) in a handful of European cultural capitals (Vienna, London, Paris ...