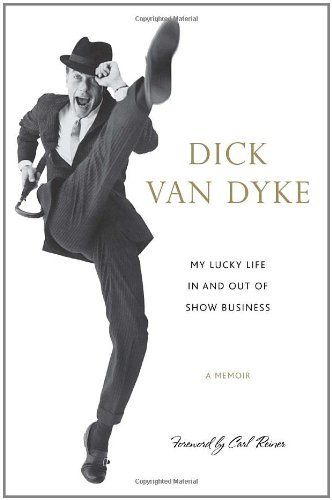 Dick Van Dyke, in his own words.

If getting paid to entertain people is your idea of the good life, then Dick Van Dyke is a lucky man. His very first job—at the age of sixteen—was to present his own radio show, and though he is now in his mid-eighties it is not clear that his career is over yet. Even when he joined the Air Force during World War II, he served his country by putting on musical revues under the indulgent command of a fading Broadway actress.

There was nothing to make this vocational path predictable. His father was a traveling salesman for Sunshine Cookie Company. Van Dyke poignantly records in My Lucky Life, a show biz memoir with a walk-on part for God, that when he saw Death of a Salesman it so captured his father's life that it sent him into a month-long depression. Dick Van Dyke (it is not a stage name!) grew up in the midwestern solidity of Danville, Illinois. He could stride out from his house "in any direction and hit a relative before I got tired." (Perhaps if you could make it there you could make it anywhere. His classmates included Donald O'Connor and Bobby Short—and Gene Hackman was the pesky kid brother of a friend.) Small-town radio led to local television in Atlanta and New Orleans. In 1955, he was put under contract by CBS, mostly to appear on other people's shows. In 1960 came Bye Bye Birdie, his Broadway breakthrough.

By that time, Carl Reiner was looking for someone to star in a television show that he was developing about a writer and his co-workers and home life. Johnny Carson was a possibility, but Reiner decided on the "likeable comedian who has India-rubber joints" (according to The New York Times's review of Bye Bye Birdie). This turned out to be brilliant casting, and it was a sensible choice even for what was known at the time. Bolder was the decision to title it The Dick Van Dyke Show despite the fact that its star was an unknown. Still, that formulation was ubiquitous in those days. Most people will best recall The Andy Griffith Show, but ...