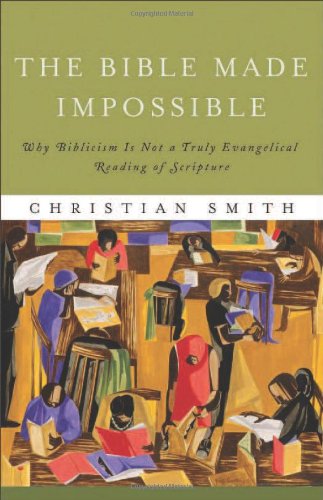 The Bible Made Impossible: Why Biblicism Is Not a Truly Evangelical Reading of Scripture
Christian Smith
Brazos Press, 2011
240 pp., 22.99

The Bible Made Impossible: An Exchange

Robert Gundry's critical response to my The Bible Made Impossible ["Smithereens!", September/October] fails in a variety of ways. On the positive side, Gundry did a better job of summarizing the first half of my book than any critical review so far; and some of his doubts about christocentric hermeneutics I think are worth considering. But as a whole it is an unimpressive review. Understanding why requires a bit of background on the book.

The first half of my book argues that biblicism, a widespread theory about how the Bible should function as an authority, is impossible. If biblicist theory is correct, I argue, then it should produce (particularly among those who hold it) a largely shared understanding of what Scripture teaches, an interpretive convergence, especially on central theological matters. But, as a matter of empirical fact, biblicism produces nothing of the sort; instead, American evangelicalism embodies a pervasive interpretive pluralism in biblical interpretation and theology. I further argue that none of the possible biblicist explanations of this pluralism succeeds in salvaging biblicism. They may work to explain pluralism, but in so doing they undermine biblicism itself, since the explanations are incompatible with key biblicist beliefs. I conclude, therefore, that biblicism is impossible, because the real world of biblical practice contradicts it, reflecting interpretive theological outcomes that should not exist if biblicism were possible. In this I am simply saying what I think is patently obvious.

The second half of my book then shifts to suggesting numerous possible constructive ideas for people who recognize biblicism's impossibility. I make three disclaimers: that these ideas are relevant only if the argument of the first half of the book works; that I do not think they are complete, sufficient, or infallible; and that they ought not to divert attention from the critical first part of the book.