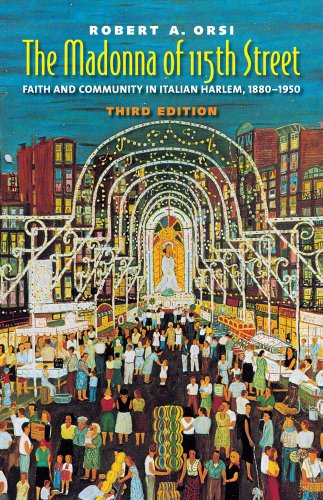 Not long after my paternal grandmother—born in the Netherlands, but who lived most of her life in Paterson, New Jersey—died, a family member was telling some of us about kindnesses performed by a neighbor couple for my grandmother in her final months. "Are they Christian people?" another relative asked. The response: "No, they're Italians."

To be sure, the label "Christian" in that conversation was for our family pretty much a synonym for "Dutch Reformed." If pushed, we could expand the definition a bit. But Catholics were certainly off our spiritual map. And when the Catholics were also Italians, the situation was hopeless.

I got over all of that long ago. For example, I consider Angelo Giuseppe Roncalli—otherwise known as Pope John XXIII—as one of the great church leaders of the past century. And while I have never been tempted to pray directly to Saint Francis of Assisi, I do find him inspiring as a model for discipleship. Still, re-reading Robert Orsi's The Madonna of 115th Street, now appearing in a third edition, reminded me of the kind of thing that worried the New Jersey Dutch Calvinists of my youth about grass roots Italian Catholicism.

What I know now, of course, is that many of my Catholic friends share those worries. A priest-theologian friend, a Polish American, had worked several years in Rome, heading up a Vatican office. I mentioned to him once that a cousin of mine had lived with his family in Rome, serving as dean of the Greater European Mission's Italian Bible Institute. "What kind of school is that?" my friend asked. "They train people to evangelize Italian Catholics," I answered. His immediate response was: "Thank God somebody is doing that! We certainly have not had any success! That school will be in my prayers."

I did not ask my friend about the specifics of his critique of popular Italian Catholicism. But I'm fairly sure he would have described a pattern of religious devotion that shared some common elements with the beliefs ...