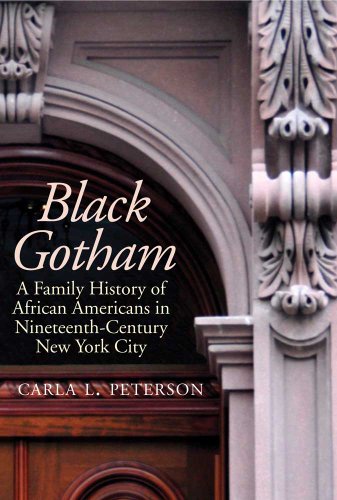 Carla Peterson's historian friends told her that her research trip to the Schomburg Center for Research in Black Culture was a fool's errand. Armed with only with the knowledge that her great-grandfather was named Philip Augustus White, and that he was a New Yorker, Peterson, a literature scholar who has specialized in the work of 19th-century African American women, wanted to learn more about her family's history.

Her pessimistic friends were wrong. Peterson is a patient and tireless (and lucky) researcher. On that first trip to the archives, Peterson found her great-grandfather's obituary, and an obituary of his father-in-law, Peterson's great-great-grandfather. Those obituaries led Peterson to church records, tax records, and a pharmaceutical archive in Madison. (White, a pharmacist, was the first African American to earn a degree from the College of Pharmacy of the City of New York. Naysaying historians, take note: scholars of American pharmacy told Peterson the school's records had "probably long since disappeared," but she found them at the Wisconsin Historical Society.) Peterson wove that research into an impressive and fascinating account of her ancestors' public, political lives, and—to use a phrase of Toni Morrison that Peterson quotes—their "unwritten interior lives." It is a remarkable accomplishment.

Philip White is Peterson's compelling central character. Peterson learns that he was not, as family lore had it, a Haitian native who fled Saint-Domingue at the time of the revolution. Rather, he was born in 1823 to a Jamaican mother and a white, English father. He grew up in Hoboken and Manhattan. As a young man, White apprenticed himself to a pharmacist; by 1847, he owned his own drug store. Throughout his life, he was a devoted churchman and a leader in civic and cultural affairs. In 1883, the mayor appointed him to the Brooklyn Board of Education; at the time of his death, he was a member of the Metropolitan Museum of Art. Obituary writers lauded ...