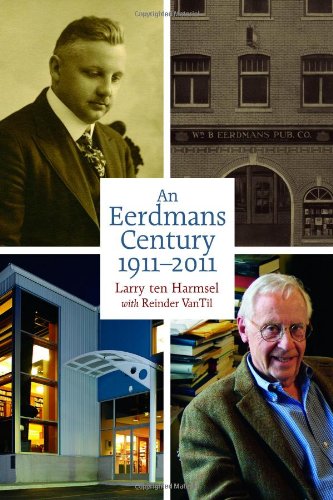 The ideal reviewer for this book marking Eerdmans' centennial would be Dutch Reformed, between seventy and eighty years old, with a sharp wit, a deep well of affection, and a long memory well furnished with firsthand anecdotes of Eerdmans' publishing history, the Eerdmans clan, and other related subjects (including Calvin College lore). Several candidates immediately come to mind, and I hope that at least a couple of them will indeed review this book. I fail to meet the criteria, but I do feel deep affection and admiration for Eerdmans, and I can add my bit to the celebration.

The story told by Larry ten Harmsel and Reinder VanTil is wonderfully improbable. William B. Eerdmans, Sr. (referred to throughout the book as "WBE"), one of eleven children born to Bernardus Dirk Eerdmans and Dirkje Pars, emigrated from Friesland—the province of the Netherlands in which he was raised—to the United States in 1901, at the age of nineteen. While studying at John Calvin Junior College (later to become Calvin College and Seminary) in Grand Rapids, Michigan, WBE supported himself by selling religious books. Persuaded that he wasn't cut out for the ministry, he became an importer of religious books and then, in short order, a publisher—a decision arrived at after much prayer, and inspired in part by conversations with Princeton theologian B. B. Warfield (whom WBE visited in New Jersey) and the Dutch theologian Herman Bavinck (whom he consulted on a trip home to the Netherlands). WBE, not yet thirty, was an exceptionally enterprising young man.

In the decades that followed, Eerdmans established a distinctive presence as a publisher of theology, biblical studies, and apologetics. Yet from the beginning, the Eerdmans list was eclectic, as ten Harmsel and VanTil make clear, including "thirty-six works of fiction (mostly for younger readers) … between 1930 and 1952" by Bertha B. Moore and "seven booklets (at 40 cents each) of 'inspiring poetic verse' by Annie Johnson Flint," not to mention the Child's Story Bible by Catherine Vos, a perennial seller still in print today.

WBE presided over the company from its founding in 1911 until 1963, when he handed the reins to his son, William B. Eerdmans, Jr. I don't know Bill Jr. (we've shaken hands a couple of times), but clearly he's one of those larger-than-life figures who entice novelists and biographers. In the genial corporate history provided by ten Harmsel and VanTil, we get glimpses of the many-sided man who has overseen Eerdmans for almost fifty years now, expanding the vision of the formative decades. There are also deft portraits of the chief editors over that span: Calvin Bulthuis (1957-1971), Marlin Van Elderen (1972-1981), and Jon Pott (1982 to the present). The book concludes with a section in which a number of employees reflect on their years with Eerdmans (a company that inspires extraordinary loyalty) and a characteristically understated but moving coda by Jon Pott.

If memory serves, I first became aware of Eerdmans in the fall of 1968, when (newly married) I came to Westmont College in Santa Barbara as a junior. (I remember the pleasing unexpectedness of the doublee at the outset.) And the first Eerdmans title I held in my hands was a little book on John Updike, pamphlet-size, by Kenneth Hamilton, in a series called Contemporary Writers in Christian Perspective.

Over the years, I acquired many books published by Eerdmans, some of which (Nicholas Wolterstorff's Lament for a Son, for instance) are among the ones that first come to mind from a lifetime of reading. Walking home from work in Pasadena, I stopped once a week or so at the Fuller Seminary Bookstore, which was then at the corner of Union and Los Robles. On the counter by the cash register, a stack of The Reformed Journal (founded in 1951 and published by Eerdmans) would appear when a new issue came out. They were free. I asked the manager (or so I assumed her to be: she knew me as a regular customer) if I could take a copy, adding that I wasn't a student at the seminary. She said that would be fine. And thus I discovered the riches of this splendid magazine, where I first encountered many writers who would later appear in Books & Culture.

At some point—near the end of the 1980s, I think—there was no more free lunch, and so I subscribed. I continued to subscribe for a while after Bill Eerdmans decided to give up RJ and it merged with Perspectives. In the meantime, Books & Culture had been launched and I met Jon Pott (who had edited RJ in addition to all his other editorial duties: a labor of love). No one else I have known from the publishing world has been such a valuable source of counsel, encouragement, and sardonic good cheer.

Included in An Eerdmans Century is a modest manifesto from Marlin Van Elderen (who went from Eerdmans to the World Council of Churches, where his work was cut short by a fatal heart attack on July 12, 2000). Here he was outlining the thinking behind the Eerdmans list:

We do not work with a definite statement of purpose, nor do we insist that books appearing under our imprint measure up to this or that standard of orthodoxy. Though the tradition out of which we come is the Reformed or Calvinistic branch of Protestantism, we have published books by and for Catholics, Anabaptists, Pentecostals, and Jews. We have published books that call attention to what their authors see as doctrinal errors in other books we have published!

Does that open us to the charge of being wishy-washy? I think not. It has always been our position that we as Christian publishers can best serve the interests of the whole community of believers by drawing our books from a wider community than any of us personally might be comfortable with.

I might just hang a copy of that on my wall.

As I read those words by Marlin Van Elderen, I was reminded of a passage in another book published by Eerdmans in this centennial year, Mark Noll's Jesus Christ and the Life of the Mind, a sequel of sorts to The Scandal of the Evangelical Mind. I have mentioned on other occasions that many people who refer to Scandal evidently haven't read it, or at least haven't read all of it. The title has a double meaning. On the one end, there is the scandal of evangelical failures (evident, for instance, in the popularity of Young Earth Creationism). But on the other hand, there is the continuing scandal of the Cross and the claims made by Jesus, affronting those who do not follow his way, among them many of the leading figures in the university, in national journals of opinion, and other venues of comparable sway.

The title of Mark Noll's new book is a forceful reminder of that second scandal. Something tells me, alas, that it won't be reviewed in The New York Review of Books, though I would be delighted to be proved wrong. Jesus Christ and the Life of the Mind will be reviewed in the pages of Books & Culture, but I want to draw attention here to a passage that resonates with Van Elderen's manifesto. It comes in a section with the subheading "Doubleness," in which Mark explores the way in which the Chalcedonian Definition of the dual nature of Christ—in its "paradox" or "apparent antinomy"—might "give shape to at least some of what humans grasp in their efforts to understand existence in general." Here's the gist, though you need to read the whole section (and the whole book):

The natural human urge moves to adjudicate competition among overarching claims. This urge, which relies on the practical necessity of the law of noncontradiction, must certainly be trusted in many scholarly arenas. But for a Christian who has experienced the saving power of Christ, it will be a smaller step, when confronting at least some dichotomous intellectual problems, to seek the harmonious acceptance of the dichotomy than for a scholar who does not believe that the integrated person of Christ was made up of a fully divine and a fully human nature.

This starts a conversation; it doesn't pretend to end one, laying down the law. We owe a thank you to Eerdmans for starting countless such conversations over the past century, all the while affirming the scandal of the Cross and the hope we share in Christ.