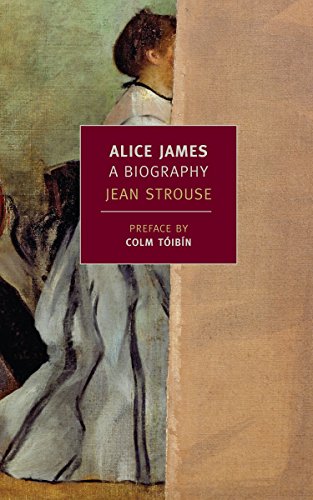 "How Dreary to Be Somebody"

The life of Alice James.

We take it for granted that biographies are composed because of a certain fame someone has achieved. Alice James, however, is the worthwhile exception. The sister of psychologist William James and novelist Henry James, Alice is notable precisely for who she did not become.

It takes an exceptional biographer to tell such a person's story. In Alice's case, she is fortunate to have been found by the shrewd, sensitive Jean Strouse. In Alice James: A Biography, first published in 1980 (it won the Bancroft Prize) and now reissued by New York Review Books, Strouse uncovers a woman of immense fascination, untapped genius, and heartbreaking fragility. By deciphering the traces of Alice's life in the writings of her brothers, Strouse not only opens up a fresh perspective on this famous family but also delves deep into the psyche of a challenging woman. As Colm Toibin's new introduction observes, "Strouse is not a biographer who begins with a theory and sets about proving it; her version of this complex life is judicious and detailed." But perhaps even more significantly, Strouse has shown that one's legacy can't be measured only by what one "accomplishes."

Alice James was born in 1848, the youngest child and only girl of the five James children: William, Henry, Garth Wilkinson ("Wilkie"), Alexander Robertson ("Bob"), and then Alice. Being born into "a perfectly self-sufficient erotic-intellectual commune," as Jacques Barzun has described the James family, was as much a burden as it was a blessing. Alice was a woman in a family of men during an era of Victorian repression; on top of that, she was smart. While defending herself from her brothers' taunts and even William's "overtly sexual" flirtations, Alice had to endure her father's confusing partiality. Though he loved his daughter dearly, Henry James, Sr., remained convinced that women should be excluded from intellectual spheres. Thus, he focused solely on educating his sons, leaving Alice to gather the scraps of her brothers' ...