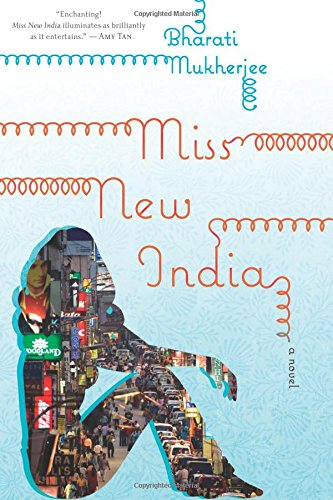 The Novel as Case Study

Meet Anjali Bose—victim of patriarchy, caste, and her own whims; ingénue of postcolonial aspiration and desperation; cynosure of destiny, her own and everyone else's; and, yes, the backwater-born heroine of Bharati Mukherjee's latest novel.

Meet, too, while you're making acquaintances, Anjali's earliest influences, those whose great expectations she basks in and founders under: a set of tradition-rigid parents and a bitter older sister; a brutal, ardent suitor and a fond, peculiar expat-turned-teacher. Don't trouble, though, over their names. Everyone in Miss New India, save its many-named namesake, Anjali/Angela/Angie/Anjolie, is, if not a flat character, a papier-mâché one.

Besides, Anjali promptly leaves these characters behind in the mofussils (read: the sticks), heading unaccompanied to the big city. She does not depart her hometown immediately, though. After graduating from high school, she spends a year or so humoring her parents, idly entertaining their wish that she marry, and indolently dreaming about remaking herself in Bangalore. Ignorance makes such whimsy hazy, but, without fail, Anjali pictures herself working at a call center, dating men too sophisticated for her, and wearing tee-shirts emblazoned with the names of bands she's actually heard rather than, as is her present lot, wearing tee-shirts featuring bands she admires based solely on the arcane geography of their concert tours.

When she does quit Guaripur, appalled by an act of sudden violence, Anjali "compose[s] a note and le[aves] it in her mother's 'just in case' lentils jar," buys a bus ticket, and sheds everything familiar. Equipped only with a "halogen smile" and nineteen years of relative in-experience, with a stack of borrowed rupee notes and passable English, she goes to seek her fortune in Bangalore, the big, unfinished city, the hub of American outsourcing. Along the way, she swoons just as a handsome stranger happens by. She becomes chummy with terrorists and thieves. ...