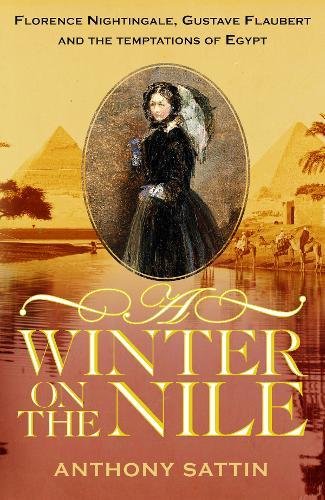 A Winter on the Nile: Florence Nightingale, Gustave Flaubert and the Temptations of Egypt
Anthony Sattin
Hutchinson, 2020
291 pp., 10.55

In 1849, Gustave Flaubert needed a holiday. His personal life was not going well. I am not sure what was wrong with his relationship with his mistress, the poet Louise Colet, but it was not a small thing. His idea of a love letter was to pontificate: "Love is not and should not be the main thing in life. It should stay on the back burner." When he particularly wanted to be romantic, he confided to Louise how splendid it would be if she were dead. Perhaps the fact that he could never be bothered to visit her was his way of approximating such a glorious tragedy.

Flaubert's greater distress, however, was professional. He was determined to write a celebrated novel. Toward that end, he had just toiled through eighteen months working on The Temptation of Saint Anthony. A true sacrifice for a man of the world, he had even spent interminable hours reading the church fathers. Still, it had been worth it. He was elated with his own triumph. The hour of his adoration was at hand.

He invited two close friends—Maxime Du Camp and Louis Bouilhet—for a private reading. The manuscript was 541 pages long. In exchange for their attentive ears for the best part of four days straight, Flaubert promised to defer to their literary judgment. Du Camp and Bouilhet did not soften the blow: "We think you ought to throw the whole of that into the fire, and never speak of it again." Faithful are the wounds of friends.

In 1849, Florence Nightingale needed a holiday. Her personal life was not going well. She was being pursued by Richard Monckton Milnes, a dashing Member of Parliament and a witty poet, regarded by many as an eminently suitable suitor. Some more cautious souls, however, found him too rakish. (This without even knowing the main of it. The Victorian period was the great age of gentlemen collectors, and Monckton Milnes opted not for seashells or butterflies or weaponry but rather pornography. A friend observed that his collection was unrivalled upon earth before adding wryly that ...