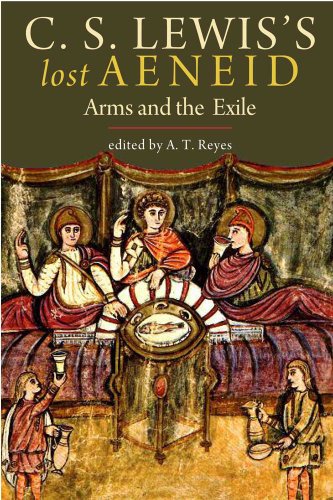 It is exciting that C. S. Lewis' Aeneid translation fragments are now available. And the story of the drafts' survival, as revealed in this edition's front matter, adds drama to their publication. If the attitude of Lewis and his brother had prevailed, we would have no trace of a great writer's efforts to render the great Roman epic in English. In a somewhat similar way, the intervention of Vergil's friends saved the original, half-finished Aeneid from the flames to which its author, on his deathbed, was keen to send it.

But in Lewis' case the intervention is not as easy to praise. Vergil gave the last third of his adult life to the Aeneid. Though he left it incomplete, the poem became an instant, undisputed classic. There is no toil or achievement of that kind in Lewis' partial translation (all of Book 1, and out of the remaining eleven books, portions ranging from 500 lines to short prose summaries to a single, incomplete line).

As a youth, Lewis did know the Aeneid well, and throughout his life he drew inspiration from it; and among other long-standing projects to take up again during his retirement, he chose its translation. But he was not a classical scholar, and early on the reception (too positive a word, actually) of his book of lyrics Spirits in Bondage (1919) and his narrative poem Dymer (1926) had conveyed that, for him, versifying was a barren tree. He made only brief efforts during later years to prove this wrong. Though by 1963 he believed that more work on his Aeneid was worthwhile, I'm not sure I can agree. As an Aeneid translator myself, I'm not an impartial judge, but I think that the amount of competitiveness I could muster against C. S. Lewis (without feeling like a presumptuous fool) is offset by my sympathetic awareness of what he was up against in Vergil's Latin.

In his foreword to this book, Walter Hooper, Lewis' last secretary and later his controversial literary executor, begins with very different sentiments: "Of all the literary remains of C. S. Lewis published since his death, this is the one that would have pleased him most." A.T. Reyes, this book's editor, quotes Hooper in the introduction as well:

The Lewis brothers felt little of that veneration for manuscripts so typical of many of us, and Major Lewis, after setting aside those papers which had a special significance for him, began disposing of the others … . Happily, however, … Fred Paxford [the Lewises' gardener] knew that I had the highest regard for anything in the master's hand, and when he was given a great quantity of C. S. Lewis's notebooks and papers to lay on the flames, he urged the Major to delay till I should have a chance to see them.

"Veneration," "the master's hand," applied to relics of a human being, particularly one who himself had well-known and important insights into human limitations—those words jar. Apparently within days of Lewis' death, the Lewis myth was animating the manuscripts.

But what's so bad about that? We do want more C. S. Lewis, and why shouldn't we have it, especially when it comes with extensive commentary? This book shows the translation as fascinating evidence of his formation, imagination, and critical drive. And yet, anyone looking in the translation for the clarity and verve characteristic of Lewis' prose will be disappointed—and left to deal on his own with the disappointment. In this edition, the aesthetic judgments offered, though deeply learned, are highly partisan and remind me more of Lewis at his narrowest—he never opened up even to the soulful modernism of his fellow Anglican convert T. S. Eliot—than of common sense.

The worst effect of surrounding this undirected, unrehearsed performance of Lewis with flattery is the way the flattery works against his dearest purposes, the religious ones.

Lewis depended, during a strenuous education and career, on the joy he found in revocations of the Middle Ages. Before he could access the original texts, he delighted in William Morris, and his scholarly concentration on the older literature of the British Isles equipped him for an opinion startling in a Vergil translator: that Gavin Douglas' 16th-century Scots translation of the Aeneid is the best. Lewis excuses, as "pierc[ing] to the very heart of the Aeneid," a whole couplet in Douglas that does not connect to a word of Vergil's Latin; and, as Douglas did, he includes in his own translation four opening lines that are definitely inauthentic, part of a corrupt manuscript tradition. The broadest influence both of Douglas and of Lewis' general inclinations, however, on the latter's translation is archaic language. I pick a Lewis passage at random, the plea of Palinurus' ghost in Book 6 (lines 365-371):

"Save me. Seek back again to Velia's port, and throw Dust on my body. Or, if thou canst the way, if thy Immortal mother can (for not without heaven's high Conduct, I ween, thou journeyest here) to thy right hand Let me but hold, and reach with thee the further strand —So even in death I shall not miss death's quietness."

This rendering buries me. The words are sonorous and beautiful; their unnatural order, giving a primordially poetic (and Vergilian) feel, doesn't fret me overmuch. But they're also massively unclear, and that starts only a little way in. Trying to leave aside the question of correspondence to the Latin (which happens to be poor) and approach on its own the sequence of thought in English, I'm honestly stymied. I can barely get through the conditional statement. The paradox (?) at the end is rather flat at best. Peeking to the opposite page where a Latin text is provided, as throughout—though, oddly, it's not the text Lewis used but a better-emended one—I see no cleverness at all, only Palinurus' pathetic wish to rest "at least" in death.

I wonder whether Lewis would have been happy, at the copyediting stage, to go through with ignoring, or actually turning upside down, a part of ancient religion that helps drive the story, not only here but at several other junctures: the belief that the unburied dead have no peace. But I can hardly be smug in this stricture: similar ones could hit every passage of my own work if belligerent manuscript readers and editors hadn't come to its rescue. Such people, of course, couldn't do the same for Lewis' translation once he was dead.

Still, in its circumstances it got a less helpful deal than it might have. I have to conclude that, granted the fragments needed to be published, they lose out through Reyes, Hooper, and the preface-writer D. O. Ross' sometimes wildly uncritical presentation, which throws suspicion even on Lewis' most accomplished lines. In a comparative treatment of a single passage as rendered by several translators (a standard technique in reviews of this genre), Ross finds Lewis better than Allen Mandelbaum, Stanley Lombardo, and Robert Fagles, all of whom have wide popular readerships and strong classroom currency—all deservedly, I think.

The worst effect of surrounding this undirected, unrehearsed performance of Lewis with flattery is the way the flattery works against his dearest purposes, the religious ones. He loved the Aeneid most deeply as a tale of suffering exile and transient joys leading toward an eternal homeland. But like Aeneas and all of us, he was inclined to halt, convinced he had come to the goal, and to mistake inspirations for their Source—a humanness that humans have to overcome, as Lewis himself explained again and again.

As a translator, he mistook his personal tastes and professional critical position for the timeless essence of a literary masterpiece, which comes from God rather than from any worldly circumstance. You could in fact ask anyone who has translated the whole Aeneid, or who teaches it regularly, and you would hear that Vergil really isn't "like" anything else. To expand Harold Bloom's formulation through religious terms of which Bloom would not at all approve, the Aeneid is not comparable to anything on earth; heartfelt prayer or trust in divine providence gives the nearest idea of its words.

To Vergil's scholars, he is a fresh and only partly traceable blend of stunts that shouldn't work, probably as surprising to his first readers as it is now. He is far stranger than the stately (if not mincing) modern classicism of Dryden's translation, which Lewis loathed, but equally stranger than the "roys in May" and "brycht and gay" medievalism of Douglas that Lewis adored. Vergil's translators need to get rid of as many preconceptions as they can and be prepared to try anything that might work, inventing a new style in every generation. Lewis might have moved in this direction—he had, after all, invented several new ways of purveying theology—but death took away the possibility. It seems perverse not even to concede that, as a stylist, he could have been a victim of time; he himself was committed to believing that no sincere Christian's shortcomings, of any kind, matter in the end.

Sarah Ruden is a visiting scholar in classics at Wesleyan University, where as a Guggenheim Fellow she is translating the Oresteia of Aeschylus.