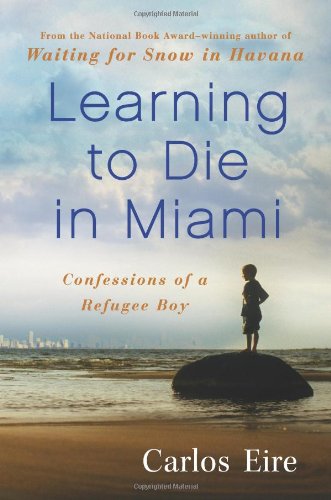 A conversation with Carlos Eire.

Carlos Eire's Learning to Die in Miami: Confessions of a Refugee Boy is the sequel to his National Book Award-winning memoir Waiting for Snow in Havana: Confessions of a Cuban Boy. In his new book, Eire reflects upon life in the United States, from the years he spent as an adolescent separated from his family in Cuba through his reunion with his mother and into his adulthood.

Eire and his older brother, Tony, were two of the thousands of children who fled Cuba in the wake of Fidel Castro's rise to power through a CIA-sponsored program called the Pedro Pan airlift. The United States granted travel visas to children. The children left Cuba with the expectation that they would return as soon as the Castro regime had fallen. Whether or not Castro fell, parents expected to follow their children to the United States. Due to the Cuban Missile Crisis, however, travel to the United States became severely restricted, and thousands of children were separated from their parents for an indefinite amount of time. In Eire's case, he and his brother were placed with foster parents in Miami, then in a horrific group home. From there, they were sent to Bloomington, Illinois, to live with their uncle. After years of separation, their mother was able to come to the United States, and she moved with her two sons to Chicago.

What prompted you to write Waiting for Snow in Havana, and then what prompted Learning to Die? From what you've said elsewhere, it seems there was a sense that you "had" to write.

There was a sense of urgency with both of them. The first book was prompted by the Elian Gonzalez affair, which was extremely disturbing to me and led me to a completely altered state of mind. I stopped reading newspapers or magazines, listening to the radio or television. I shut myself off from the world completely because I did not want to know what was being said about the controversy, much less what the outcome was going to be. And I went inwards very deeply.

This new book was not set in motion ...