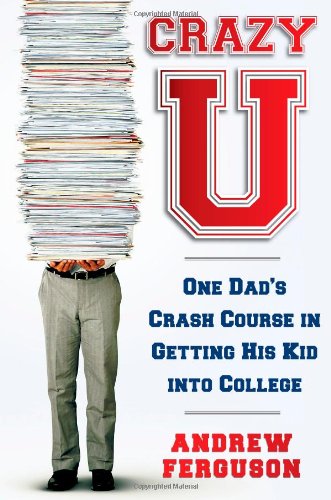 Andrew Ferguson's quest to get his son into a good college.
May/June 2011

It is always unfair for a reviewer to fault an author for not writing the book the reviewer had really wanted. And I can hardly fault Andrew Ferguson for his biting, substantive, and funny critique of the college admissions process. But Crazy U: One Dad's Crash Course in Getting His Kid into College is not the book I was hoping to read. What I really wanted was for someone to write a book explaining the insanity of higher education and then say that he decided to do something different—that he decided to opt out, or chose for his children some radically different, less expensive, more interesting alternative. As a colleague of mine recently pointed out, the 21st-century equivalent of the year-long "Grand Tour" of European sites taken by upper-class American young men and women in the 18th and 19th century would be considerably more affordable than college today. Maybe it's my own self-interest as the mother of two kids who are still more than a decade from thinking about college. But I can't help but wonder: Where is the homeschooling movement for higher education?

Briefly, Ferguson considers an alternative to the current system. In a conversation with a friend, he says, "So here's the sensible thing to do …. We should drop out of the bubble. Get our kids into a discount college. Maybe suggest they take a year off. Get them to focus on what they want to do with their lives. Stop wasting time." His friend asks, "So that's what you're going to do?"

"And make them hate us for the rest of their lives? … I don't think so."

After reading Ferguson's book, this alternative is something that many readers will be more likely to consider. He begins his college admissions journey—oops, his son's college admissions journey—with a trip to a high-end college counselor, who enumerates all of the (often contradictory) grounds on which students get rejected from élite (or not so élite) colleges: Their grades are high but they didn't take enough AP classes, they racked up a lot of extracurricular activities but didn't spend enough time on any one, they focused on a single extracurricular activity and show no diversity of interests, their parents paid for them to have some kind of educational experience in Washington and they seem pampered, their parents didn't pay and they got a job at home instead doing something menial, like being a camp counselor.

The only thing that kids can really do is game the system:

At its most intense, the admissions process didn't force kids to be Lisa Simpson; it turned them into Eddie Haskell ('You look lovely in that new dress, Ms. Admissions Counselor.') It guaranteed that teenagers would pursue life with a single ulterior motive, while pretending they weren't. It coated their every undertaking in a thin lacquer of insincerity. Befriending people in the hopes of a good rec letter; serving the community to advertise your big heart; studying hard just to puff up the GPA and climb the greasy poll of class rank—nothing was done for its own sake. Do good; do well; but make sure you can prove it in a college app.

Of course, not all students are able to pursue college admissions with this kind of singlemindedness. Colleges like to talk about how egalitarian they are, how they're trying to draw students from a variety of backgrounds. But when push comes to shove, the people most likely to devote their summers to community service or puffing up their GPAS or constantly worrying about how their every move might look to admissions officers hail from a certain socioeconomic background.

In their efforts to get a diverse student body, colleges have placed more emphasis on personal interviews—trying to gauge factors like "social responsibility," "interpersonal skills," "cultural appreciation and curiosity." One psychologist has developed an alternative to the SAT, a test to measure "creative intelligence," "practical intelligence," and "analytical intelligence." But none of these are predictors of performance in higher education. As Ferguson muses about this psychologist, "He's taken the tenderhearted and almost true bit of grandmotherly wisdom—everyone is good at something—and stretched it to the breaking point: everyone is good at something that will make him a successful college student at a selective school."

Ferguson is at his best in experiencing the admissions process (almost) firsthand. He takes the SATS at his kitchen table while his son is doing the same at school. He is struck by how poorly he does on the math section. But mostly what he can't get over is how boring it all is. "That something so dull could have an effect so pyrotechnical is hard to credit. It's as if the Trojan War had been fought over Bette Midler."

Ferguson's thoughts on the essay portion of the college application are also smart. He describes how his son does battle with the various questions—questions like "What do you think people who know you would be surprised to learn about you?" or "Tell us about a moment in your life when you refused to be embarrassed." After multiple drafts of these essays, Ferguson began to speculate why students struggle so much with this task. "There are lots of possible reasons for their reticence. They might be stupid. They might be shy or unreflective. They might lack imagination, or perhaps they find themselves less interesting than other people, other subjects. They might for these reasons or others simply dislike talking about themselves."

But the essay section also brings Ferguson to wonder how much adults are—and how much they should be—hovering over the applications their kids submit. He edits his son's essays multiple times. (Maybe it should be a separate question how much professional writers should be involved in this process.) And just to satisfy his journalistic curiosity, Ferguson goes online to buy an essay as well.

Throughout Crazy U, Ferguson portrays his son as a happy, well-balanced kid who is also something of an enigma. He picks the schools that interest him, based on just about nothing academic. Father and son tour schools, but we don't hear about them going to any classes. In fact, Ferguson doesn't seem to be particularly interested in college itself. He expresses nothing more than a passing curiosity about what his own child will learn.

Maybe it's part of Ferguson's self-deprecating humor to portray his 18-year-old as more confident, knowledgeable, and calm about the whole process than he himself is. But it also has the effect of suggesting that, for all the research he has done, he still think his son knows best what is right for him. In this, Ferguson is like those parents who smoked pot and so won't tell their children not to because, well, it would feel hypocritical. His own college career, he tells us up front, was a waste—spent partying and goofing off. He graduated without the slightest idea of what he would do afterward. Perhaps, the logic goes, it turned out okay for him. So why not for his son?

In the end, despite all the stress of the application process, Ferguson's son goes off to the college of his choice, a big state university. On move-in day, the young man tells his father that he's had trouble registering for classes, that his first, second, and third choices for a freshman writing seminar have been filled. His only options now are a history of the 1960s, a class about Mad Men, and one about Queer Theory. That this often happens at large universities, that many of the classes available have only the most tenuous connection to a liberal education—none of this has come up in Ferguson's chronicle.

When it finally does, Ferguson writes, "I was going to say something, release the rising gorge, but the moment passed."