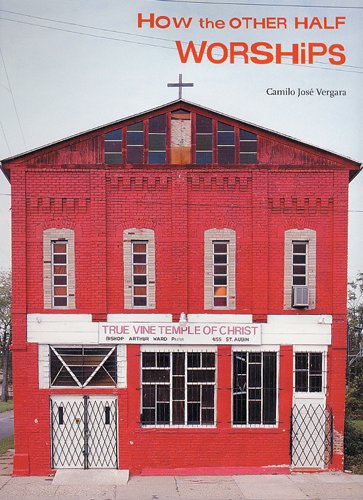 Christ in the City

A while back I was speaking with a man new to New York from Ethiopia. Describing his Harlem neighborhood, with an expression of amazement, he observed, "There are churches everywhere!" He saw what few seem able to see—a religious life intricately woven into the urban fabric. Helping us all to see something of the vibrant and diverse world of Christian faith in America's cities is Camilo José Vergara's How the Other Half Worships. A work of both documentary photography and sociological reflection on inner-city churches, How the Other Half Worships is a major study of urban religion and Christianity in America. With more than 300 photographs, Vergara helps visualize a determined and vibrant life of Christian faith. He is informing us about an ecclesiastical world few outside the churches themselves know much about.

For more than thirty years, Vergara, originally from Chile, has with great originality documented the progressive destruction of some of America's greatest cities. Most often he has focused on the inner city, what he calls the "ghetto," invoking the strong term to match the hardened exclusion of so many black and Latino neighborhoods. His method is to photograph buildings and neighborhoods in cities such as Baltimore, Camden, Detroit, Chicago, Gary, Los Angeles, New York, and Philadelphia often over a period of decades, charting their history of decline, change, ruin, and, on occasion, restoration. Vergara's sequencing of pictures generates a distinctive way of following what has happened to the city's physical and social form.

Two of his most important published works in this area are The New American Ghetto (1995) and American Ruins (1999). Responding to the dignity of the city, his photographs provoke a vital question: Can there not be a better way? If today some cities have become "in," Vergara's work is a reminder of how abandoned so many of America's cities have become, how vulnerable their infrastructure remains, and how challenging their ...