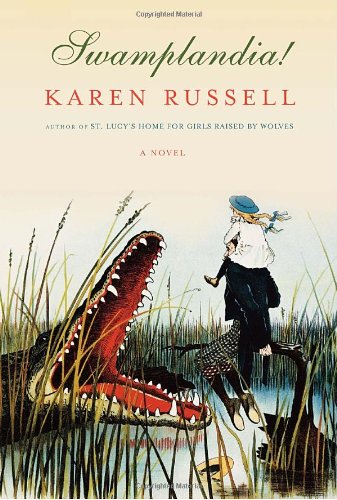 If her dazzling short fiction is any indication, wunderkind Karen Russell is Joy Williams' Gen Y successor, taking up the elder writer's powers to incarnate mad, inquisitive worlds of animal tenderness and irony. It's no wonder that Williams praised Russell's break-out short story collection, St. Lucy's Home for Girls Raised By Wolves, as "exquisitely rambunctious." The collection tapped a pumping vein of Russell's inventive, surreal prose, and beautifully showcased the carnie family Russell takes up again in her first novel.

Swamplandia! chronicles the final days of an eponymous gator-wrestling theme park and the island clan that sired it. As the novel opens, youngest daughter Ava, the narrator, looking back at what she calls "the Beginning of the End," recalls that at first she was "oblivious of the dangers" that she, her brother Kiwi, and her sister Ossie faced. Hadn't the worst already happened? Senile patriarch Grandpa Sawtooth was installed at Out To Sea, a floating nursing home, and Swamplandia!'s fate rested with their father, Chief Bigtree, deep in mourning for Hilola, his wife, their mother, the high-diving star of the gator-wrestling show.

Hilola's death—at the age of 36, from cancer—has complicated the Chief's untimely inheritance and haunts his efforts to rally their children to a Carnival Darwinism take-down of the World of Darkness, Swamplandia!'s theme park nemesis. Despite his bravado, the Bigtrees fall swiftly, dressing in gift shop garb and scavenging from the Swamp Café freezer until Kiwi flees the island for the mainland, Ossie falls in love with a ghost, and, finally, the Chief suspends all shows and heads to mainland Loomis County on a shadowy business trip.

All this leaves Ava veritably deserted in the humid, swampy palm groves, a tag-along bridesmaid to Ossie, who plans to elope with courtly, invisible dredgeman Louis Thanksgiving and escape to The Eye of the Needle, an ancient Indian mound of clay, conch, and oysters shells—and, ...