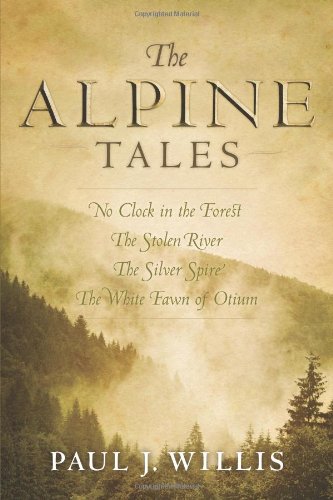 The Brush of a Wing

An eco-fantasy set in the Pacific Northwest.

In his essay "On Stories," C. S. Lewis observes, "In life and art both … we are always trying to catch in our net of successive moments something that is not successive …. I think it is sometimes done—or very, very nearly done—in stories." This "something" is finally ineffable. Lewis compares it to a bird one can never catch, though one may glimpse it or feel the brush of its wing.

Paul Willis' exquisitely written Alpine Tales gave me more than once that sense of "something that is not successive." Reading these highly original works, an ineffable something (the brush of the bird's wing?) would invite me to pause and simply bask in a passage like the following:

Shining round about the crater's lip, spaced like the stars on Stella's brow, stood brilliant white figures, blazing in the dawn. One light only hung now in the sky, sole director of the song. No other stars remained aloft … unless the singers on the summit were the stars themselves come to grant one brief taste of the music of the spheres.

The first two of these fantasy novels, or romances, were published individually in the 1990s, and now all four are between covers for the first time. Each presents an exotic quest and the immemorial conflict between good and evil in a landscape both beautiful and perilous. They may be read independently of each other, but the plots interlock and form an overarching story. Set in the Cascade Mountains of the Pacific Northwest, the tales take place around the actual three peaks of the Three Sisters Wilderness, renamed Three Queens in the story. The author has climbed there all his life and is intimately familiar with them—although the map included with each tale takes liberties with their features. The Queens make a beautiful setting—sublime, as one character describes it, with the right proportions of beauty and peril. Willis captures it in his precise and loving attention to natural detail:

Northward, a pleasing chaos of rivers and mountains stretched to a snowbound horizon. One could lose oneself in the deep canyons and waterfalls and hanging glaciers. The peaks were jagged, sharp with arêtes and needled pinnacles. To the east lay a land of dry buttes and open sagebrush, ponderosa and pinyon pine. The view was brown and dry and clear, an exhilaration of unfenced roaming.

In each book a young couple sets out on a quest whose object is at first hidden from them, but which has much to do with saving the pristine wilderness of the mountains. They are guided by mysterious figures: three eccentric uncles and three royal ladies, who appear to be the embodied genii loci of the Three Queen mountains, but with archetypal resonances reaching far beyond that:

All three sisters—queens really—were circling before her arm-in-arm. Stella romped in the blue robe of hope and sky, blonde hair streaming behind her in the wind. Lady Demaris flew beside her in forest green, laughing and tossing her unbraided chestnut hair. Then Lady Lira, raven-haired and … wearing the crimson of her redemption.

As in George Macdonald's Phantastes, the actual world and the fantasy world lie side by side; the human characters move in and out of these, often unsure of which world they are in: "The other and greater wilderness … sometimes appeared within and beyond this present one. Yet it was not really other at all, William thought, but the true place that was there all the time."

Climbing is the controlling metaphor of the book, and the characters ascend morally and spiritually as they move up and down the peaks. The technical expertise of the author makes descriptions of climbing convincingly real and dramatic, as in this scene of rock-climbing in the dark:

The invisible rock was whirling past, skimming under her finger-tips. Her stomach felt its weightlessness as she sank and flew, swiftly tilting into the void. Too fast, she thought. Soon she should be bottoming out and swinging upwards. Now. Now. But not yet. She felt the rope catch on something far above her and then grow slack. She was swinging, sailing, into the dark. Not up. No longer across.

There are a number of dangerous falls as well as adventures in underground rivers and infernal caves. The protagonists face opposition from monsters within nature itself (the Lava-Beast and a Jokulhlaup—Icelandic for an exploding glacier lake); from greedy humans who would dam and destroy the wilderness for profit; and even from one of the archetypal queens, who succumbs to evil and seeks to murder the climbers. The climbers are guided by the archetypal uncles and the good queens. These guardians come to their aid at critical junctures and are truly "immemorial comforters." The questers are also helped by poems that have the power to charm, like ancient runes, and literally guide them on their way.