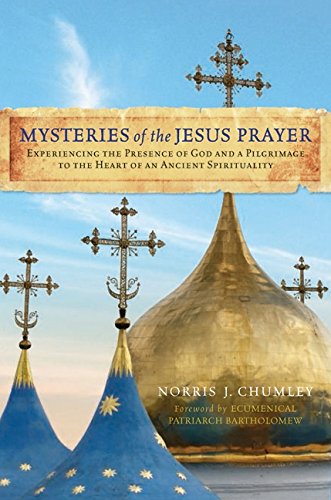 Mysteries of the Jesus Prayer: Experiencing the Presence of God and a Pilgrimage to the Heart of an Ancient Spirituality
Norris Chumley
HarperOne, 2011
208 pp., 34.99

A pilgrimage inspired by the Jesus Prayer.

What's so mysterious about the Jesus Prayer? It's one of the shortest and simplest prayers you can find: "Lord Jesus Christ, Son of God, have mercy on me." It's one of the most ancient prayers, too; think of how often in the Gospels people ask Jesus for mercy. A prayer for mercy would likely have been one of the variations when the Desert Mothers and Fathers, who sought to pray constantly, were trying out different short, repeated verses of Scripture to discipline the wandering mind. (St. Augustine reports that they "have very frequent prayers, but these are very brief.") Those ancient monasteries and hermitages are the spiritual nursery in which the Jesus Prayer had its birth.

It might be better to call it a spiritual laboratory, though, because this short petition has profound effects. To some extent, that's only natural: whether it is a Christian prayer, a Hindu mantra, or a two-item shopping list, any attempt to keep repeating a phrase—any attempt at all to restrain the mind's aimless ramble—is going to reverberate through mind, memory, and will. But since this is, in fact, a prayer, invoking Jesus Christ and asking for his mercy, it has deep and life-changing effects on the person who makes it a mental habit. In time, the teaching is, you begin to sense a direct connection with the presence of God, and to hear his responding voice.

Over the centuries a lot of wisdom has built up about how to use the Jesus Prayer safely and effectively. It's wisdom that has been conserved mostly in Orthodox monasteries, which is where men and women go who want this single-minded pursuit of union with God. When it comes to prayer, a monastery is where you find the rocket scientists.

Author Norris Chumley explains that, while pursuing a degree at Union Theological Seminary in New York, he wanted to learn more about how to know Christ through prayer—not just book-knowledge, but by direct experience. He found in his church history professor, the Very Rev. Dr. John A. ...