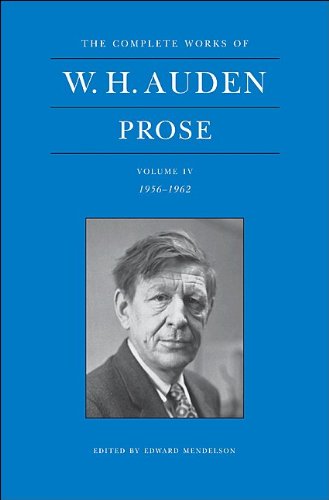 This fourth volume of W. H. Auden's prose, edited and introduced by Edward Mendelson with customary mastery, covers a mere six years of the poet's life. But they were eventful years for him, personally and intellectually. In 1956 he was named Professor of Poetry at his alma mater, the University of Oxford; in 1957 he won the Feltrinelli Prize for Literature, which allowed him for the first time in his life to buy his own house, a cottage in Austria; and in 1962 he published a large, heterogenous, yet comprehensive account of his key critical ideas, The Dyer's Hand. Though at the end of this period Auden was only fifty-five, The Dyer's Hand would be the last truly major work of his career.

Auden's selection as Professor of Poetry was deeply gratifying to him, largely because his relationship to Oxford was complex. Though recognized as among the brightest undergraduates of his time there (1925-28), he had received only a third-class degree. This was found generally inexplicable. A friend of Auden's would later say, "We all took it more as a joke than a serious matter and I cannot remember Wystan ever speaking of it at all." But J. I. M. Stewart took his exams with Auden, sitting across from him during the written portion, and later remembered that as Auden wrote, "The tears were coursing down his pale and ample cheeks." (Stewart earned a First and later became an Oxford don and, under the name Michael Innes, a crime novelist.)

Perhaps more troubling to Auden, many English people had never really forgiven him for leaving the country for America in 1939, when war was about to break out, and not returning once war did break out. Indeed, a number of the electors of the Professor of Poetry (all holders of the M.A. from Oxford) declined to vote for Auden for this very reason.

So as he planned the lectures he was obliged to deliver—public addresses, three each year during his five-year term, were his chief professorial responsibilities—he did so with trepidation. He ...