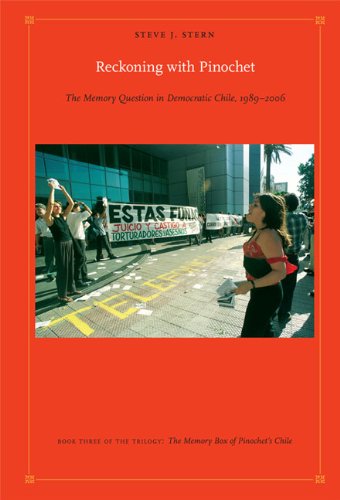 Some memories are so horrible that, in the absence of realistic possibilities for healing, they are best shoved into what Steve Stern calls a "memory box" and consigned to oblivion. But sometimes, the contents of that memory box are too potent, too bitter, and too credible to remain confined. In one of Stern's visceral images from his book on the Chilean transition to democracy, these festering wounds have become "memory knots" on the political body, "screaming" when touched.

In Reckoning with Pinochet, Stern explores how the Chilean memory box was repeatedly opened and shut by politicians, judges, commissions, and the public in the years after Augusto Pinochet resigned from the presidency in 1990, and how memory knots continually pushed the process past apparent impasse for a slow, cumulative achievement of global import.

Memory knots appear in three forms: anniversaries which remind us, for example, of the disappearance of a husband; specific places, like mass graves, that trigger floods of public emotion; and, most important, people whose mere presence is enough to blow open the memory box, however adamantly we have insisted on the past being forgotten. Somewhere in this mix of conflicting memories lies the question of truth. And truth is much more than the facts. In the context of the outer limits of human depravity (torture, disappearances, and sexual humiliation, for starters), truth is intimate and physical. Truth can be deadly (hence the appeal of the tightly sealed memory box), but reckoning with it is perhaps the only way forward.

In one of his finest moments after being inaugurated as Chile's first civilian president in 17 years, Patricio Aylwin departed from his prepared speech at the state funeral of his predecessor, Salvador Allende. Allende's legacy had been a battleground since September 11, 1973, the day of his ouster by Augusto Pinochet's military junta, but on this day in April 1990, the new government gathered to honor him with a reburial. Chileans were effectively undoing the myth of Allende as danger to patriotic Chile, and the related myth of Pinochet as savior. The risk lay in a simplistic inversion of good and bad, and another cycle of distorted truth.

During his eulogy, Aylwin sliced through the mythmaking with an insistence on truth: he made no attempt to hide his many conflicts with Allende during the latter's three-year roller coaster of a presidency from 1970 to 1973. Neither the murder, torture, and repression that marked the Pinochet dictatorship, nor the trickle, gradually becoming a stream, of government corruption—none of what followed should be allowed to cloud our vision of what came before the coup, Aylwin said. If forced to relive those years, he would return to the adversarial role he had assumed during Allende's presidency.

At this point in the funeral, jeers and whistles began to be heard, and here Aylwin set aside his hat as president and assumed that of moral leader: "To those who are whistling I say … the only language in which we can understand each other is the language of truth. I am here to give a testimony of truth."

Truth was soon to become the central issue, as Aylwin was setting up the first of two Truth Commissions to bring healing to the nation. The first commission's job was to identify state violations of human rights, while—and this is key—the perpetrators were still in charge of the military and police. At various times during the process, Pinochet would rattle sabers at Aylwin, mobilizing the troops, marching his men into the capital, and so on. Much of the commission's work had to be done in secret, because of the risk of sabotage: when mutilated bodies began to emerge from a previously unknown mass grave, the military plowed the site before truth could be established. It was, Stern says, a "rolling impasse," during which tremendous progress was being made, despite the appearance of going nowhere.

With this book, Stern has completed a monumental trilogy, begun with Remembering Pinochet's Chile (2004) and continued in Battling for Hearts and Minds (2006). He is convinced that something of global significance happened in Chile. He brings to the subject a deep dialogue with mid-20th-century Europe, along with the Jewish "memory cultures" that emerged in response to the Holocaust. But Stern insists that the Chilean story is in itself worthy of being told, and that its value is an entirely different question from that of its similarities and dissimilarities with the Holocaust. Two features of the Chilean drama stand out for him. First, the role memory played from the very beginning, such that testimony and counter-testimony infused nearly every twist and turn of the story. And second, the ways in which Chile was a watershed in the history of human rights and transnational advocacy.

This was a revolution built around memory. In 1981, for instance (treated in volume 2 of the trilogy), when Chile exploded in dissent after eight years of terrified silence, protests revolved around undermining Pinochet's carefully crafted image of the self-sacrificing patriot, who had done his duty when his country needed him. Growing evidence of Pinochet's bald-faced looting of the state treasury to build palaces for himself was enough to crumble his image as the nation's humble savior.

Stern names four main competing frameworks of memory in Chile, categories that arose in sequence and competed for primacy in the public imagination. The first, already mentioned, was memory as salvation from the years of Allende. Shortly thereafter there emerged an antithesis: memory as unending rupture. This framework appealed most to victims of the regime, such as mothers of disappeared children. Over time, as human rights organizers, especially those of the Roman Catholic Church in Chile, began to make headway in pushing atrocities to the center of attention, a third framework appeared: memory as persecution and awakening. As the bitter truth became clear to Chileans, the truth that there was another side to Pinochet's image, a fourth framework became useful to the dictator's disheartened base: memory as a sealed box, intended for oblivion. "Shut this box quickly," Stern imagines the warning label on the memory box saying, "before it casts a poisonous spell on your house."

Meanwhile, another drama was taking place, this one on a global stage. Chile was becoming a catalyst in the emergence of an international human rights movement. By 1973, Chile was able to benefit from a mature lexicon and global networks of advocates. Chilean exile communities formed in many countries, who then invited their hosts to hear testimonies of fear and terror, contrasted with the junta's image of a sparkling, peaceful Chile. In Canada, in Australia, in West and East Germany alike, Chilean exiles tapped into and contributed to legal theories of human rights, and integrated into their message an insistence on truth and testimony as central to justice. One of the Chilean story's main accomplishments, Stern says, was the "sensitization to human rights as a core value in the public culture, irrenunciable regardless of a crisis that once served as justification for atrocity or looking away from it."

At the same time, a stronger global tide was rising that today threatens to erode these achievements: creeping individualism in public culture, undermining the capacity for empathy. As privacy becomes a central value in public discussion, transnational advocacy becomes ever harder to achieve. The remarkable Chilean transition thus simultaneously serves as a warning: ground-breaking transformation has always required cultural transformation. It is hard, slow, "ants' work."

It is also moral in nature, which goes a long way to explain why the Catholic Church comes off so well here: with deep roots in the slums where repression was worst, and with an ancient culture of testimony and witness, the Catholic Church proved to be unresponsive to the junta's seductions, and more: it provided staff and money for tireless documenting and research of atrocities, along with pastoral care for the victims.

Perhaps Stern's greatest achievement lies in maintaining a human perspective: there are many personal testimonies throughout these pages that complement, represent, and at times contradict or qualify his judgments. To accommodate nuance and contradictions, Stern adds an "afterword" to each chapter, a short essay often taking the story in an entirely different direction, or allowing the human dimension to complicate the analysis. Drawing again on Holocaust studies, Stern warns against deriving simple lessons from radical evil.

It is in these afterwords that the true depth of his thought and the true majesty of his writing become apparent. In the end, this is a story about the deepest questions, and Stern never resorts to facile shock-tactics, never plays tricks on the reader, and always insists that something very big and deeply human is at stake. Several times during my reading, I frustrated my wife with lengthy lapses into silence during our evening walks. I was indeed elsewhere, walking alongside Steve Stern as he reckoned with evil in our generation.

Paul Grant is pursuing a PhD in history at the University of Wisconsin.