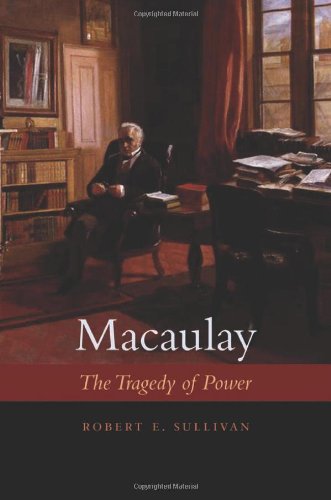 Macaulay in the Dock

Was he utterly base, contemptible, and odious?

He remains to me," Lord Acton once wrote about Thomas Babington Macaulay, the early Victorian historian who is the subject of this biography, "one of the greatest of all writers and masters, although I think him utterly base, contemptible and odious." [1] Acton, a towering intellectual of the later 19th century, was at once a strongly ideological Liberal and an entirely faithful Catholic. He considered Macaulay insufficiently liberal, and Acton, as somebody aware of the eternal law of God, felt bound to censure the historian. Robert E. Sullivan, the author of this study, is also of liberal inclinations; and he, too, is a loyal Catholic with a firm moral outlook. The result is a biography treating Macaulay as base, contemptible, and odious.

Sullivan is willing to acknowledge that Macaulay, if not a great master, was a great writer. The historian's deployment of words was his greatest skill. He could describe the Roman Empire in an early essay as at risk of achieving "a tottering, drivelling, paralytic longevity." Few loved the government of Oliver Cromwell, Macaulay noted; "but those who hated it most hated it less than they feared it." Macaulay was the Simon Schama of his day, regaling a mass public with elegant evocations. Every sentence flowed effortlessly (though, as Sullivan makes clear, at the expense of enormous effort). Every paragraph concluded with an epigram. The verbal dexterity was what made his five-volume History of England from the Accession of James II (1849-61) a triumphant success. Even before its final volume, 46 editions had appeared in the United States. Macaulay was rewarded with the first ever peerage conferred in the United Kingdom for literary achievement.

The author of this new biography also recognizes the enormous influence exerted by Macaulay in matters great and small. He shaped Weber's formulation of the affinity between Protestantism and capitalism. He sketched something like the theory of Habermas about the creation of a public sphere. ...