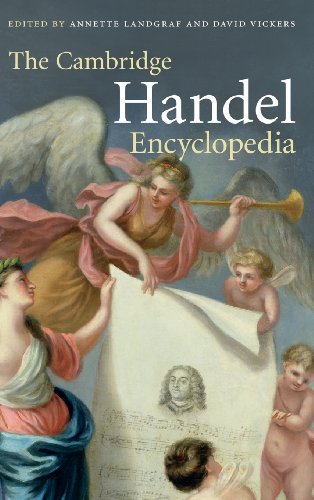 The publication of the Cambridge Handel Encyclopedia in 2009 marked the 250th anniversary of his death in April 1759. It presents the results of recent scholarship after some forty years in which Handel's reputation and the way we hear and play his music have been radically transformed. No composer has gained more from the rather oddly named "early music" revolution and the virtual re-creation of the Baroque style in music.

In the course of this radical transformation the notion of Handel as a religious composer, once so central to his reputation, has come under fire, in particular from the doyen of Handel scholars Winton Dean. Dean blames evangelicalism for much of the distortion of Handel, representing the composer as a humanist and man of the theater hijacked by stuffy righteousness and provincial piety. If one wants a (rather touching) example of the older view of Handel, you can find it on the internet in the blog Wordwise Hymns under the name of Robert Cottrill, who includes an expression of regret about Handel's moral failings—not least, his habit of swearing in several languages, which is not what you might expect from someone divinely inspired to write Messiah. Handel's binge-eating and drinking is passed over in silence, though it made a serious contribution to the lead poisoning and neuropathy that dogged his later years. Between Winton Dean's assertion that neither true religion nor any serious engagement with Christianity is to be found in Handel and the idea that he was essentially a religious and Christian composer there is a lot of elbow room, and it properly includes the reaction of Christians who from the first until now have found Messiah to be a prayerful meditation on the mysteries of faith referred to in its epigraph from Paul's first Letter to Timothy, chapter 3 verse 16.

The situation is roughly as follows. Whereas Handel has been regarded as the supreme exponent of the English (and to some extent American) style of lay religion—above all in Messiah, treated at one time as the singular peak of his achievement—he is now represented as a master of drama and very human emotions, and a cosmopolitan whose music requires the same professional virtuosity today as it did in the first half of the 18th century. There has been another great though related change. Previously the provenance of his music was North Atlantic and Northern European, indeed virtually confined to the countries of the Reformation. Victor Schoelcher, the Alsatian abolitionist, in his Life of Handel (1857), commented on the great gulf fixed between English and French taste, particularly when it came to Handel. Significantly, when Romain Rolland commended Handel to the French, he kept away from Messiah. Today some of the most brilliant exponents of Handel's music are French, Italian, and Eastern European.

Given this breakthrough across the borders of the Reformation, it is quite interesting to find the older and more restricted provenance of Handel still reflected in the contributors to the Encyclopedia, who are overwhelmingly Anglo-American, Australian, and German. The same is true of the fifty people named as at the forefront of the Handel revival: Joan Sutherland, Charles Mackerras, Janet Baker, Emma Kirkby, Harry Christophers, Paul McCreesh, Lorraine Hunt Lieberson, and so on. The few French examples, which for some reason do not include Emmanuelle Haïm, all came under the influence of the great "American in Paris," William Christie, and his marvelous Les Arts Florissants. In England it was musicians and musical scholars at Cambridge University who played a major part in the Handel revival, though Birmingham University was also a major center.

The recent Handel revolution and indeed the whole history of what is now called his "reception" over three centuries raises interesting sociological questions. Most obviously, we have the odd situation whereby one of the great figures of the musical canon has been "received" as one kind of composer for two centuries but is now freshly celebrated for what had been his major sphere of activity up to 1741: Italian opera. This is a remarkable turnaround, given these works entirely disappeared from the repertory from the 1740s on, and were regularly characterized in musical texts as cast in an artificial Baroque form beyond all prospect of revival. Of course what happened to Handel's operas also happened to the operas of Monteverdi, which were virtually the first examples of the form, as well as to the operas of Vivaldi, Rameau, and Lully. Vast tracts of Baroque music of all kinds disappeared, and this reminds us that these were times when music was relentlessly a matter of the contemporary performance of works by craftsmen rather than the recapitulation of classics by geniuses. Bach unceremoniously dumped as old-fashioned some extremely fine music by his predecessors at the Thomaskirche and was in turn (mostly) dumped by his successors. Handel reused his own music, for example the Coronation Anthems, as well as the music of other people like Keiser, Alessandro Scarlatti, and Muffat, knowing that his audiences would come to them fresh, not as recycled material improperly presented as original composition. The Hallelujah Chorus reused at the end of his Foundling Hospital Anthem would still have had the shock of the new. And, of course, the amazing means of musical reproduction available to us over the past half century were not available to Handel and his contemporaries. Music traveled slowly. The vogue for Messiah in the United States was not initiated by the Boston Handel and Haydn Society until the teens of the 19th century.