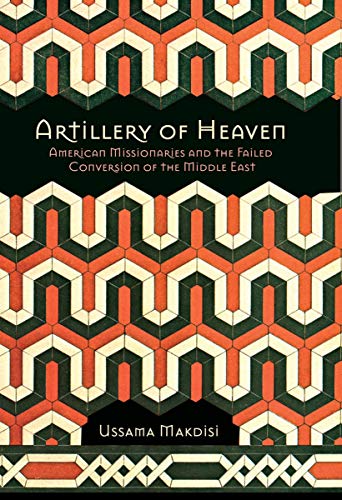 Artillery of Heaven: American Missionaries and the Failed Conversion of the Middle East (The United States in the World)
Ussama Makdisi
Cornell University Press, 2009
280 pp., 20.95

American missionaries in the Levant.

This is a different sort of history book. But that should not be surprising, given its author. Ussama Makdisi, son of memoirist Jean Said Makdisi, nephew of Edward Said, and author of The Culture of Sectarianism: Community, History, and Violence in Nineteenth-Century Ottoman Lebanon, is fast making a name for himself as a meticulous and well-rounded scholar who refuses to restrict himself to a single historical narrative when tackling his subject. In Artillery of Heaven: American Missionaries and the Failed Conversion of the Middle East, Makdisi makes use of material from a variety of sources to provide as full a picture as possible of a series of extraordinary 19th-century encounters in the Levant.

Indeed, before plunging into the story of 19th-century American Protestant missionaries in what is today Lebanon, Makdisi provides extensive background information on their Puritan forebears in 17th- and 18th-century America. He also compares and contrasts the Puritans during that era with the Maronites of Lebanon. This sets the stage for the eventual conflict between American Protestant missionaries and the Maronite Catholic Church. In the main, Artillery of Heaven is about the As'ad al-Shidyaq affair (a case of conversion to Protestantism and its brutal consequences, to which we'll return in a moment) and the ideas of Butrus al-Bustani (another convert, with a very different trajectory), two outcomes of that fateful clash, and as such the book brings to life the religious tumult and violence of 19th-century Lebanon. Though not without occasional oversights, it is a penetrating examination of a tragic and seminal episode in the history of American Protestant missionary activity in the Ottoman Empire, and of the far-reaching socio-political lessons a remarkable man drew from this and other instances of religious violence in his tormented land.

Refreshingly, Makdisi steers clear of ideological renditions of history; he does not reject the missionaries' view in order to adopt its reflexive Arab nationalist or Islamic counterpart. Indeed, he makes clear that "[t]he answer to one form of historiographic myopia is not, or at least not only, to write from a so-called native perspective, to switch vantage points, to valorize local resistance, or to retreat into orthodoxy." American missionaries in the Middle East, Makdisi emphasizes, cannot properly be considered cultural imperialists; unlike their predecessors in America or their British and French counterparts, they were not part of a larger imperial political project. And he adds the trenchant observation that "decolonization, rather than giving voice to natives, simply took it away from the missionaries."

Makdisi locates American proselytism in the Levant within a long tradition of American Protestant missionary activity that initially targeted American Indians and subsequently spread to other countries. In so doing, he brings to light the ideological underpinnings of those zealous men who arrived in the Levant beginning in 1820 intending to convert the native population. Among the most important beliefs animating the early missionaries, educated at Andover Theological Seminary and sent to the Levant by the Congregationalist-dominated American Board of Commissioners of Foreign Missions (ABCFM), were "the flying of time" (by which was meant the imminence of the end of days), an almost complete rejection of the virtues of coexistence between Protestants and others (including other Christians), and a related insistence that converts dissociate themselves entirely from their native culture. "They came not as crude military crusaders," Makdisi writes, articulating the missionaries' lofty sense of self, "but as the redeemed 'artillery of heaven,' men who were determined to reclaim biblical lands from the god of this world who had long since enslaved the ancient Eastern Christian churches."

Naturally, all this made the early missionaries' work in the Levant—restricted by Ottoman imperial decree to non-Muslim subjects of the Empire, but later tightened even further following complaints by local Christian religious authorities—very difficult. The missionaries' most formidable foe would be the Maronite Church and its patriarch Yusuf Hubaysh, especially after the latter got wind of the conversion of a native son, As'ad Shidyaq. (Aware of how loaded certain ethno-linguistic designations have become, especially in the maelstrom of competing nationalisms in the Middle East, Makdisi points out that "[a]lthough the American missionaries from the outset identified him as an 'Arab,' As'ad Shidyaq was not properly speaking an Arab in any nationalist or racialist sense.")

The Maronites, an Eastern Catholic sect whose members had come to be concentrated in Mount Lebanon, had their own rigidly ideological view of their role and mission in history, much of it revolving around a "myth of perpetual fidelity to the Roman Catholic orthodoxy." The almost inevitable clash took a turn for the worse when, in 1826, the patriarch decided to imprison and torture Shidyaq, who refused to renounce his new Protestant faith. Shidyaq, born in 1798, would die in captivity circa 1830.