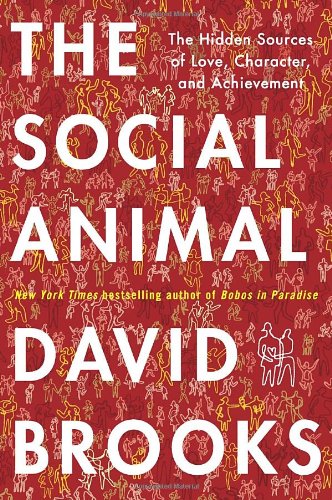 "The new sciences of human nature."

In The Social Animal: The Hidden Sources of Love, Character, and Achievement, published earlier this year by Random House, New York Times columnist David Brooks explores "the new sciences of human nature" and their implications for everyday living. David Michael talked with Brooks via phone in March.

Your book is in many ways descriptive—a survey of findings in psychology and neuroscience. Is it also prescriptive in any way?

The main goal is to give people a different viewpoint, to draw their attention to things that are happening below the level of awareness, both in themselves and others. Above all, that we're not primarily the products of our conscious thinking.

In which cultures do you see an acknowledgement of the importance of emotion and thinking more fluidly?

It was present until the methodologies of physics were embraced by social scientists. John Maynard Keynes was perfectly attuned to the complex realities of human nature, and then the physicists took over economics. I do think that psychologists have a handle on this as well as some parts of the education world. And then the world that you guys write about—the world of theologians and poets and people like that. The broad sweep of the humanities.

You write that "Philosophy and theology are telling us less than they used to. Scientists and researchers are leaping in where these disciplines atrophy—they're all drilling down into an explanation of what man is." I'm wondering where you're thinking theology and philosophy failed, and what their role is now?

Both fields—philosophy more than theology—have been caught within an internal logic and maybe an insular logic. Especially in philosophy's case, building ever more complicated logical structures, which has divorced it from the wider public. That's less true of theology, but I do think it's fair to say that there are very few theological thinkers today playing a role in the popular culture as Niebuhr and Heschel and Buber did in their ...