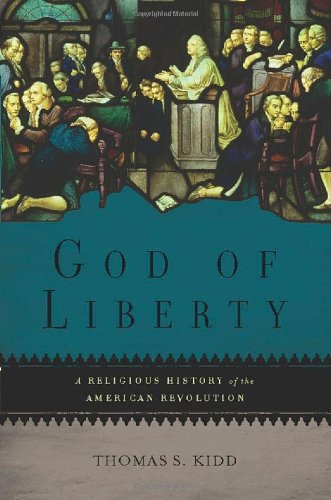 A religious history of the American Revolution.

Editor's note: To celebrate Independence Day, we've reached back to the July/August 2011 issue for Matt Reynolds' review of Thomas Kidd's God of Liberty: A Religious History of the American Revolution. And if you're in the mood for more reading about the American Revolution and the Founding era, Thomas Kidd himself has a number of pieces on the B&C website examining the subject from multiple angles—not to mention pieces by Mark Noll and many other scholars: more than enough to occupy your entire holiday weekend.

For all the heated debate over the Founders' faith—or lack of faith—the American Revolution is often treated as exclusively a political affair, overlooking how thoroughly a range of religious convictions, yearnings, and forebodings suffused the spirit of '76. Reckoning with the Revolutionary era's many religious dimensions is the mission undertaken, and carried off marvelously, in Thomas Kidd's God of Liberty. A prodigiously productive professor at Baylor University, Kidd—already the author of a Great Awakening history and a forthcoming Patrick Henry biography, among other volumes—has established himself as a leading student of early American religion. In all likelihood, he'll soon be mentioned in the same breath as luminaries like Mark Noll, George Marsden, and Harry Stout, all of whom grace the book's star-studded roster of endorsers. God of Liberty effortlessly straddles the divide between scholarly and popular history, uniting academic rigor with a pleasing readability. It deserves, and hopefully will receive, an audience well beyond the ivory tower.

Readers might naturally expect an explicitly "religious" history of the Revolutionary period to challenge certain secularist interpretations, and if so, they will not come away disappointed. In particular, Kidd debunks the notion that the founders sought to immunize American politics and public life against the influence of religion. Even Thomas Jefferson and James Madison, the early statesmen most habitually invoked by contemporary advocates of rigid church-state separation, would have recoiled at the dogmas promulgated by groups like the American Civil Liberties Union. Elements of secularist mythmaking, then, receive a solid thrashing, however politely administered. Nor, it should be added, does this unfailingly fair-minded book hesitate to puncture extravagant conservative claims about the Christian character of the American experiment. Kidd wisely refuses to portray the Revolution as a merely religious or merely political episode. Categories the modern mind instinctively segregates fused too tightly in the Revolutionary mind to permit any facile disentanglement. To the American colonists, Kidd writes, "political and religious liberty were intertwined and inseparable." No less than British encroachment on their pocketbooks, they feared British encroachment on their consciences.

Religiously and politically, the American founders were a diverse lot. Emory University scholar John Witte has helpfully assembled them into four groups: Puritans, who favored the Godly commonwealth model of colonial Massachusetts and Connecticut; civic republicans, who synthesized non-sectarian Protestant morality with an ethic of public spiritedness redolent of ancient Greece and Rome; evangelicals, who preached the redeeming power of the new birth; and Enlightenment skeptics, who sought the scientific axioms behind a divinely-ordered cosmos. In Witte's telling, the Puritans and civic republicans united on behalf of government support for religion, setting aside divergent perspectives on the specifics of Calvinist theology. And the evangelicals and Enlightenment skeptics, reaching across a more pronounced theological gulf, fought to dismantle structures of state sponsorship and control.

Nowhere in God of Liberty does Kidd refer explicitly to Witte's classification scheme, but the echoes shouldn't be missed. For the signal achievement of this book is to re-create the religious atmosphere—the matrix of principled alliances, marriages of convenience, bitter feuds, and surly standoffs—within which a common set of Revolutionary ideals arose and gained momentum. Especially in the unlikely collaboration between devout evangelicals and their deistic detractors, Kidd locates the genesis of remarkably durable beliefs about American identity and purpose. At no point, he insists, was the struggle with Britain "simply about unfair taxes and colonial politics." Rather, "religion, both during the Revolution and afterwards, provided essential moral and political principles to the revolutionaries and forged the new American nation."