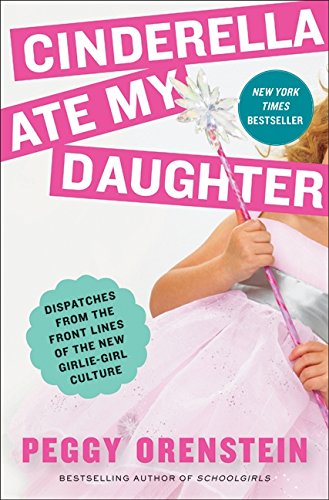 If you have spent any time watching the recent spate of bridal reality shows—from Bridezillas to Say Yes to the Dress—you will know the answer when the maid of honor/wedding consultant/caterer asks the bride how she envisions her special day. "Well," she will say excitedly, "I've always wanted to be a princess."

There was a time when it would sound a little absurd—if not narcissistic—for a grown woman to announce such a thing. As Peggy Orenstein writes in her book Cinderella Ate My Daughter, "When I was growing up, the last thing you wanted to be called was a 'princess'; it conjured up images of a spoiled, self-centered brat with a freshly bobbed nose who runs to Daddy at the least provocation." Today, though, Orenstein tells us, her daughter, Daisy, is growing up in a society awash in princesses. All of the girls in school want to be princesses. And just about every adult that Daisy encounters calls her "princess." When the dentist asks Daisy, "Would you like to sit in my special princess throne so I can sparkle your teeth?" Orenstein can hardly control herself. "'Oh, for God's sake,'" I snapped. 'Do you have a princess drill too?'"

Orenstein isn't imagining things, as she learns from a visit to a now industry-famous Disney executive, Andy Mooney. In 2000, Mooney went to a Disney on Ice show, where he found himself surrounded by little girls in homemade princess costumes. He saw the tremendous marketing opportunity and proceeded to launch a line of Disney Princess products. These princesses—Snow White, Cinderella, Sleeping Beauty, Ariel, and a couple of others—had never been marketed apart from movies about them. But now they are everywhere. Princesses from entirely separate stories appear on the same products, as if having a tiara in common is all they need to form friendships. In 2009, Disney sold $4 billion worth of princess products.

But it is not just Disney that has realized the marketing opportunity in selling thousands of girly-girl products to America's parents, suggesting that even a two-year-old is in need of some pampering and a shopping spree. Another marketing executive Orenstein spoke with explained to her "the pink factor." "If you make a pink baseball bat, parents will buy one for their daughter …. Then, if they subsequently have a son, they'll have to buy a second bat in a different color. Or if they have a boy first and then a daughter, they'll want to buy a pink one for their precious little girl. Either way, you double your sales."

Even products that didn't used to be sex-specific at all now must cater to girls in a particular way:

Consider the "girls' editions" of classic board games …. The sparkly pink Ouija board includes a deck of seventy-two cards that "Ask the questions girls want to know." ("Who will text me next?" "Will I be a famous actress someday?") Pink Yahtzee includes a fuzzy shaker and dice that boast, rather than numbers, hearts, butterflies, flowers, cell phones, flip-flops and dresses. Monopoly Pink Boutique Edition claims to be "All About things girls love! Buy boutiques and malls, go on a shopping spree, pay your cell phone bill, and get text and instant messages."

It's easy to understand Orenstein's revulsion at such products. Girls' interests are made to seem particularly vapid and superficial. And whatever messages are being offered by these manufacturers have been adopted by other businesses as well. Nail salons where I live are routinely frequented by the under-eight set.

Orenstein worries that even in this era where women have achieved so much, her daughter "lives in a world that tells her, whether she is three or thirty-three, that the surest way to get [ahead] is to look, well, like Cinderella." Actually, to say that Orenstein "worries" is something of an understatement. Parts of Cinderella Ate My Daughter read like the rantings of an insomniac at 3 AM who can't shut off her brain and get back to sleep.

There's the incident she describes with her daughter at Target, when her husband told Daisy that she could get a Barbie doll. Orenstein recounts: "I demanded that he take it away from her. She started to cry. So I gave it back." Then she and her husband argued some more and she took the doll away. Orenstein explains: "I promised I would get her a well-made Barbie instead, perhaps a Cleopatra Barbie I had seen on eBay, which, at the very least, was not white or blond and had something to offer besides high-heeled feet. As if the ankh pendant and peculiar tan made it all okay." At which point her daughter sobbed, "Never mind, Mama …. I don't need it."

I wanted to sob too, just reading about this exchange.

Let's try to sort out some of Orenstein's issues. To her credit, she notes that girls and boys have always played differently. She even cites a study in which, given the choice, female monkeys opt for playing with dolls and cooking pots while males will choose police cars and balls. How much, she wonders, can you blame toy manufacturers and parents for providing their children with toys that seem gender-appropriate? But she also argues that there is room for nurture as well—"girls with older brothers have stronger spatial skills than both girls and boys with older sisters; boys with older sisters were also less rough in their play than their peers."

But that summary of the research is where calm, rational Orenstein leaves us. Then neurotic Orenstein takes over again. She worries most about girls and boys playing separately—an insidious practice encouraged by the Monopoly Pink Boutique Edition and all of the other sex specific toys on our children's shelves. Suggesting, reasonably enough, that by playing with members of the opposite sex, children learn how to communicate more easily across gender lines, she then cites a researcher who says, "Part of the reason we have the divorce rates we do, domestic violence, dating violence, stalking behaviors, sexual harassment, is a lack of ability to communicate between men and women."

This doesn't even pass the smell test. Girls and boys used to play much more separately than they do now and our divorce rate used to be much lower. But Orenstein is so breathless in her concerns that she doesn't pause to wonder about that.

Her thoughts about the "materialism" in this princess trend are, meanwhile, all over the map. She worries about toys that are poorly made (hence the objection to the cheap Barbie doll). But then she goes to the American Girl Doll store and finds that it's hard to buy one of these well-made dolls and a few of their accessories for less than a couple hundred dollars. She worries about families spending too much money on absurd toddler beauty pageants—in which five-year-olds are strutting runways with hair extensions and gaudy makeup—but then she excuses some of their behavior because they are not all white and well off.

Ultimately, Orenstein appears to be deeply confused about what feminism means for her daughter. She takes apart fairy tales and modern children's books, trying to discern their underlying message. "The Little Mermaid" is just a story in which a girl gives up her voice for a man, she complains. But she also doesn't like more modern stories such as The Paper Bag Princess or Princess Smarty-Pants, in which the heroines decide they don't need boys after all:

I may want my girl to do and be whatever she dreams of as an adult, but I also hope she will find her Prince (or Princess) Charming and make me a grandma. I do not want her to be a fish without a bicycle; I want her to be a fish with another fish. Preferably, a fish who loves and respects her and also does the dishes, and his share of the laundry, and half the childcare.

And then there's her reaction to pop star Miley Cyrus' turn to the sexy side:

I am exhausted just thinking about Orenstein's ambitions for her daughter. Imagine how her daughter will feel.