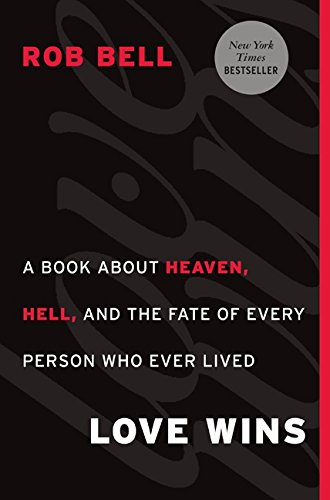 Rob Bell is not easy to pin down.
July/August 2011

Upstairs, hidden in a closet, I have a 2.3 gallon blue plastic penguin with a head that swivels and a beak that blows cold steam (a handy, dandy directional humidifier for those nights when the kids are hacking). I have argued with that penguin for hours, and while I still can't pin it down to a particular point of view, the time spent was helpful preparation for a book like this one.

Still, despite the fog, after 202 pages of brow-furrowing and dog-earing and underlining, there are a number of things that Rob Bell said clearly (or clearly implied). Though I'd be willing to bet my blue penguin that he'd ease back on a few of them in conversation.

Nine things we know about Rob Bell as a result of Love Wins:

It is obvious that Bell has spent a great deal of time with a great number of sinners. It is obvious that he cares for them, that he wants them to find the love and peace that only Christ can bring. It is obvious that he has spent years shouldering grief for others and answering phone call after phone call which—in a pastor's home—never bring good news. He has spent real time up to his elbows in Hell on earth, manning a spiritual hospital, morgue, and sewage treatment plant. People are, after all, people, and a healthy church is place for the unhealthy.

I have a great deal of respect for Bell's calling, for the task he faces, and for the work he has set out to do. I, as a mere writer of this and that, owe him double honor (1 Tim. 5:17). That said, and with a desire to see Bell do a great deal of good for the kingdom he hopes to advance, Love Wins is a pitiful piece of coffee-shop thinking and foggy communication. It reads like an extended blog post, and feels like one too—all the way down to the typesetter's decision to line-break between every paragraph and eschew all indents. It is a pile of wandering wondering without a clear destination. As for all the marketing kerfuffle, does Bell in fact deny Hell's existence? No. Of course not. Well, maybe. There is a type of hell on earth, certainly. People are hell-bent on things. When we don't trust God's story of us, that's a kind of hell.

Hold still Rob, answer the question. Is there an actual place of eternal torment in the life hereafter?

Well, eternal is a tough concept. It can simply mean a long time, or a different time or another time or maybe even a place without time. But that goes for eternal life as well. As for Hell, well, it's a useful word. We need strong words.

Later, Bell grants that there might be a Hell, and people might choose to stay in it. But he also appears to think that people won't have to. They can leave. And given that God will still want them and still love them, and given that the gates of Heaven will always be open (allowing us to come and go), and given that Love Wins in the end, it's fair to say that while Bell might not confidently proclaim that Hell (if there is one) will be shut down for lack of business, there's a good chance it will be eventually, making it a sort of empty purgatory. But it's hard to say. Bell doesn't like to plant his feet when he thinks.

Bell is an impressionist. He goes with his gut and his aesthetic finger in the wind. In this book, he starts his impressions in the preface and he doesn't look back. Have you heard a story about Jesus that bothered you? As we've already seen, Bell's on your team. Really? Without qualification? What if that sermon bothered me because it was true and because the rule of my idols is still strong?

Of course he isn't. Then why does he say that he would be? There is a strange unstated axiom floating around in the background of the book, namely, the gospel will necessarily be appealing when presented correctly (if your church isn't growing, find a new God, etc.). If the Jesus you've heard preached is off-putting, then you've got the wrong Jesus.

But that's simply not what we see in Scripture. I absolutely agree with Bell that all peoples will come to Christ. Every knee shall bow, every tongue shall confess. Bell's embrace of a Heaven on Earth is biblically rooted. But how will it come about? What is a fallen people's first response when the "good news" arrives? When men pick up stones or spears or guns or machetes, when Nero's pulse quickened (when Herod's pulse quickened), their reactions were natural for fallen men when encountering the Truth.

Bell seems driven to make the gospel palatable for fallen men, and it is hard not to sniff a wide seam of desired coolness in his positioning. He backs away from Christians and churches that overemphasize Hell (read, emphasize at all, or mention the place on their websites). He thinks that popularity is inevitable when it comes to the Truth (and eventually, yes, I agree). But the difference between when the Apostle Paul was stoned by a mob and when he led a revival had nothing to do with whether or not what he said was true, or if he was talking about the right Jesus.

Bizarrely, Bell is at his most concrete and most confident when making aesthetic claims—and not only when he's talking about a surreal painting on his grandmother's wall. He puts on his critic's cap and passes incredible judgment on the history of the whole stinking world.

A story that might include billions of people trapped in a black hole of misery with no way out "isn't a very good story." On the other hand, a story where every last body is "enjoying God's good world together with no disgrace or shame, justice being served [meaning what exactly?], and all wrongs being made right is a better story. It is bigger, more loving, more expansive, more extraordinary, beautiful, and inspiring than any other story about the ultimate course history takes." Italics and brackets mine.

That's a profoundly big statement (I hope God bears it in mind as He continues His work), and it brings us to the single greatest issue in Love Wins and hippidy-hipster Christianity everywhere.

What is our standard for goodness? What is our standard of justice or mercy or love? What standard could we possibly reference that is above God, to tell God that He could weave a better tale? Not our guts, surely. Not our neo-Victorian, post-tribal, tight-jeaned, Mac-loyal, fair-trade, culturally located scruples, surely. I do agree with Bell's criticisms of narrow American Christianity when it comes to our assumption that Hell will be teeming with crowds of the damned and Heaven will be a sparsely populated garden party for the super special. I think we've inverted those two. I agree with him when it comes to Matthew 24 and his belief that Christ's dire warnings were about the fall of Jerusalem. Yes, we American Christians have told some crappy eschatological stories. But this new fog is no fix. And sitting in preemptive judgment on what God might choose to do with His creation sets a new record for American imperialism.

Cool-shaming is a major player in all evangelical discussions of Hell and evil (along with any social hot-button issues). But our focus can't be cultural acceptance or sneers or growing congregations. We should strive to love what Christ loves and loathe what Christ loathes. We must think what He thinks, and peer pressure be damned (not purgated).

Is He anti-gay? Is He anti-science? Does He think that the earth is the center of the universe and all the planets and stars go through drunken epicycles to lap us? Then so do I. (He would know, after all.) Does He think Darwin is an idiot or a prophet? Does His story include creatures meant for damnation till the end? Know that He is good and can do no evil. If that's His story, then there is no better story (whether we understand right now or not). And there is no other Jesus for us to turn to. We cannot swap God for a newer, greener, and more culturally sustainable model—and we shouldn't want to.

In the end, Love Wins does raise questions that should be discussed. But it raises them breathily and from a strange place, a place where cultural loyalties are too much in play, and God has been told to watch where He treads or we might have to find another one. After all, our great coffee isn't holding us back.

N. D. Wilson is a novelist, essayist, and screenwriter. His next novel, The Dragon's Tooth, will be published by Random House in August.