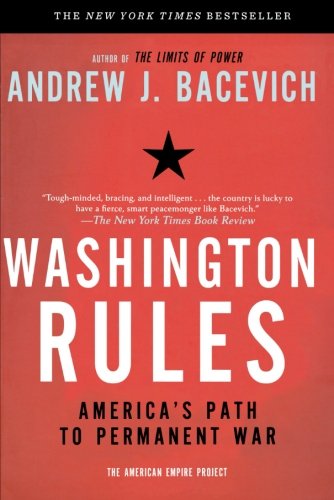 Empire as a Way of Life

The path to permanent war.

As a devout midwestern Catholic in the first two decades of the Cold War, Andrew Bacevich imbibed the Manichean mythology of American good and Soviet evil. After graduating from West Point, Bacevich became a seasoned and learned warrior in the holy cause: combat service in the Vietnam War, duty in Germany and the Persian Gulf, teaching at his alma mater while completing a doctorate in history at Princeton. Shortly after the collapse of the Berlin Wall, having served for 23 years as a professional soldier and officer in the U.S. Army, Bacevich retired at the rank of colonel. The American Century could not have had a more courageous and scholarly member of its legions.

Yet all along Bacevich was growing wary of the faith, and in the elegant, wise, and sardonic memoir that opens Washington Rules, he recounts how he slowly and painfully realized that "orthodoxy might be a sham." The inept and butcherous prosecution of the Vietnam War had triggered his initial suspicions; but, as Bacevich tells it, he was too ambitious to let his doubts mature into sustained intellectual and moral reflection: "Climbing the ladder of career success required curbing maverick tendencies." (Pursued out of the same careerism, graduate study was "a complete waste of time"—a claim that's belied, I should note, by the historical erudition of his work.) But then he saw the shabby state of the former East Germany after the fall of Communism: the ragtag remnants of the fabled Red Army (Russian soldiers were peddling their shoddily-made medals, watches, and uniforms), a physical infrastructure that had clearly not recovered from World War II. Like General Smedley Butler—a decorated Marine Corps veteran who had confessed in War Is a Racket (1935) to being "a high class thug for Big Business"—Bacevich began to wonder how he'd fallen for the hype of the Evil Empire.

Now a professor of history and international relations at Boston University, Bacevich has become one of the most incisive ...