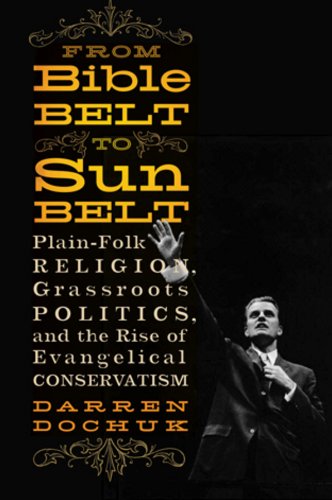 Evangelicals and politics in a new light.

In 1968, Christian Life magazine featured a story on "The Reagans and Their Pastor." The Hollywood-star-turned-governor explained: "While prayer always has been a part of my life, I have spent more time in prayer these past months than in any previous period I can recall." He had much to pray about in that rocky election year. But when not praying, Reagan now and then slipped into jeremiad mode. Mild-mannered and affable in the eyes of many, Reagan raged at that "mess in Berkeley." The cold warrior morphed easily into the culture warrior. Civilization seemed to be collapsing. Juvenile delinquents and their liberal élite enablers wanted to wreck the Golden State. In response, Reagan promised constituents that he would stand firm against hedonism, crime, and all manner of sin. And though the situation was grave, he was not above cracking a well-timed joke. The typical campus radical or hairy young libertine, Reagan famously quipped, "dresses like Tarzan, has hair like Jane, and smells like Cheeta."

Southern California's conservative Christians, many who came out West from the southern plains, naturally took to the Gipper. He spoke their language. Darren Dochuk reflects on Reagan's popularity among those faithful in his wonderfully written and expertly researched From Bible Belt to Sunbelt: Plain-Folk Religion, Grassroots Politics, and the Rise of Evangelical Conservatism.

In the early 1970s, evangelicals halfheartedly supported Richard Nixon, who, along with being shifty, was once too cozy with silk-stocking Republicans like Nelson Rockefeller. Later in the decade, evangelicals from Atlanta to San Diego began to cast a suspicious eye on Jimmy Carter. In their view, the Baptist president from Plains, Georgia, was a liberal appeaser, soft on communism, and softer still on moral degeneracy (code for homosexuality, abortion, and feminism). Reagan, by contrast, would not vacillate on family values, thought supporters. Neither was he a seedy political chameleon. He united ...