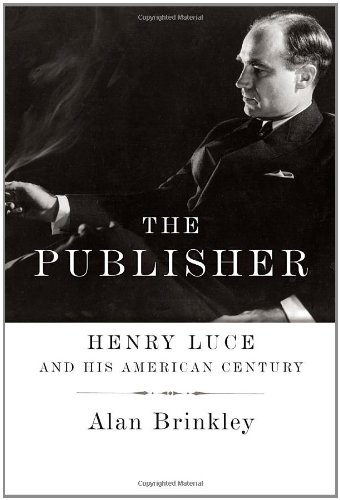 The Life and work of Henry Luce.

Early in 1960, as the Cold War dragged on, Henry R. Luce took on the already much-discussed project of defining America's "national purpose." As the head of the Time-Life publishing empire, Luce was as influential as any American of the time, aside from President Eisenhower himself. The magazines over which Luce had broad editorial oversight included Time, Life, Fortune, and Sports Illustrated. Each of these dominated its field in a day when print media still played a central role in guiding widely shared parts of the culture. Using the pages of Life, which had a circulation of close to seven million and claimed a readership of up to 25 million, for a series in which leading American commentators (Archibald MacLeish, Adlai Stevenson, Walter Lippmann, Billy Graham, David Sarnoff, and others) would reflect on the nation's unifying purpose, seemed a significant way to help steer a rapidly changing culture that had been thrust only recently into world leadership. "Here we are at the beginning of a really possible golden age of western culture," Luce observed, yet some people "still want to believe that tending to wealth alone will give culture and a decent standard of living to all men on earth."

In retrospect, knowing how fragmented America would look even a decade later, the widely hailed 1960 project of trying to define a "national purpose" from corporate headquarters in New York through the words of a group of distinguished white males suggests to us how vastly different the United States looked just a half century ago. Understanding the mentality of someone like Henry Luce, then, provides a window for looking into an American world that, despite many continuities, was vastly different from our own. As Alan Brinkley suggests in his engaging biography, the immense success of Luce's magazines was not so much in shaping mainstream mid-20th-century American culture as it was in reflecting and reinforcing the outlooks that were emerging in the influential white middle class.

Searching for a national purpose was also very much in character for Henry Luce. His was a purpose-driven life marked by reflection on what good he could do for the world with his power and influence. He was also, as Brinkley sympathetically shows, to some extent corrupted by his power and his immense wealth, but those failures made him all the more discontent and determined to find out what higher cause he could serve. This strong sense of calling undoubtedly arose from his rigorous Presbyterian upbringing as the child of missionaries to China. As has often been observed of Luce, he transformed his parents' missionary zeal into a broader mission of America to save the world. In his most famous essay, "The American Century," published in Life early in 1941, he urged Americans to use their power to export whatever is best about Western civilization—"above all Justice, the love of Truth, the ideal of charity …. It now becomes our time to be the powerhouse from which the ideals spread throughout the world and do their mysterious work of lifting the life of mankind from the level of the beasts to what the Psalmist called a little lower than the angels."

One might think that a biographer would find in this quest for purpose—and especially its religious and intellectual dimensions—a major motif for understanding the inner workings of a complex man like Luce. The publisher was, after all, sometimes accused of being more interested in ideas than in people and was often said to be too "philosophical" in his conversation. Yet in an otherwise excellent, insightful, and eminently readable account, Brinkley puts these interests of Luce to the side. The central story line is that of an intelligent and immensely competitive man who is a spectacular success as a businessman, becomes a major commentator and a sometimes controversial force in American politics, has two largely unsatisfactory marriages and a number of notable affairs, is seldom happy, and is never content. Brinkley mentions Luce's religious faith in passing from time to time, and near the end he devotes two pages to describing how "the simple unquestioned faith of [Luce's] youth was long gone"; although still an active Presbyterian, he was looking for something in "the great liberal tradition" that might be, as he once put it privately, a "New Religion, the search for God, without Christianity." But Brinkley clearly thinks that Luce's changing faith and lifetime religious quest was epiphenomenal. Never is it presented as the source of any other idea or interest (other than his transference of missionary zeal to the American mission). "He was fascinated by Christianity," Brinkley summarizes, "in the same way he was fascinated by politics, business, culture, and many other areas of life."