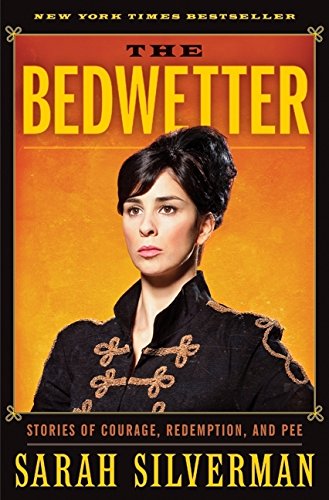 A memoir by comedian Sarah Silverman.

Comedian Sarah Silverman admits that she has chosen "to build a career on shock and profanity." And while she doesn't say so directly, her memoir is clearly aimed at justifying both her career path and her boundary-trampling brand of humor. An early influence was her father, Donald, owner of Crazy Sophie's Factory Outlet in small-town New Hampshire. When she was only three, he taught her how to swear a blue streak in public. At his cue, she even told her grandmother to shove some brownies in a very inappropriate place. The guests present laughed uproariously and swept away her grandmother's anger. Out of shock came laughter, a lesson Silverman learned for life. "The reactions were verbally disapproving but there was an unmistakable encouragement under it all. No meant yes."

At five years of age Silverman would announce to strangers: "I love tampons." The success of her joking swelled her pride and made her eager for "more more more push push push." But when she joked about her deceased baby brother, strangled in a crib's faulty mattress frame, her family did not laugh. Silverman discovered the other side of laughter's coin, that boundary-pushing carries the risk of bruising and breaking relationships. "Four words swam in my head—the most grown-up arrangement so far in my five years: What have I done?"

Silverman's moments of self-awareness help the book rise, from time to time, above its general crudeness. She comments, for example, on the comedian's place in society: "Comedians are almost universally tortured, and not even redeemed like normal writers are by being 'deep.'" As a comic writer, Silverman is indeed no Eudora Welty. The haphazard organization of the book reflects the anecdotal nature of stand-up comedy. When she is not lewd, her style is breezily pleasant at best. Yet, as with the best stand-up, Silverman knows how to use individual sorrow as the source of pity and laughter.

As the book's title boldly acknowledges, Silverman's personal torture was her ...