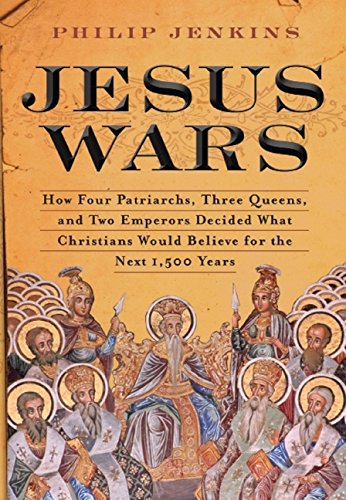 If the student of the history of Christianity should be asked what was the most critical period in the history of Christianity, she would have many options. She could choose the era of the Reformation, which profoundly divided Western Christianity. Or she could choose the 19th century, whose missionary endeavors led Kenneth Scott Latourette to christen it the "Great Century." She might even choose the present era, with its explosion of Christianity in Africa and Asia. But all of these would be uninspired choices. The savant would recognize that it was the period between 400 and 600 that saw the most profound transformation of the Christian world. It is this period that is the subject of Philip Jenkins' latest work, Jesus Wars: How Four Patriarchs, Three Queens, and Two Emperors Decided What Christians Would Believe for the Next 1,500 Years.

These centuries are not well known to the average Christian. They do not have the clarity of the (commonly held view) of the patristic era. Nor do they have the sense of closure of the 4th century, during which Christians wrestled with the nature of the Godhead, concluding with a definition of the Trinity that is still recalled each time the Nicene creed is recited in worship. Rather this was the era in which the question of the person of Christ was passionately debated: What was the relationship between the humanity of Christ—so manifest in the gospel record—and the Christian belief that in Christ there was the eternal God?

At the heart of this debate lay two competing visions from two of the great ancient centers of Christianity. The Egyptian church of Alexandria—traditionally believed to have been founded by the evangelist St. Mark—reflected the philosophical vision of Plato. The one was the key and always superior to the many. God was one and hence the unity of the Father and the Son was paramount. The humanity of Christ, though real, was ephemeral. Just as Christians of this persuasion read Scripture by ...